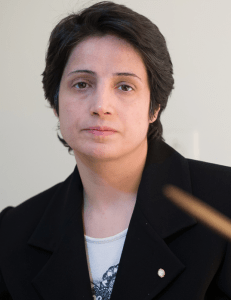 Nasrin Sotoudeh is a human rights lawyer and public intellectual who has represented Iranian opposition activists and politicians, women who protested Iran’s forced hijab laws, and prisoners sentenced to death for crimes they committed as minors. A fearless advocate, Sotoudeh has faced harassment and intimidation for years and spent time in and out of prison since 2010.

On June 13, 2018, Nasrin was arrested and taken to the notorious Evin prison, where she is currently being held. Upon her arrest, she was informed that she had been sentenced in absentia to five years in prison for her work as an attorney. After two unfair trials and months of being denied the right to choose her own lawyer, seven more charges were added to her sentence, which totals 38 years and 148 lashes.

“My dear Reza, everyone ponders about their freedom while in prison. Although my freedom is also important to me, it is not more important than the justice that has been ignored and denied. . . Nothing is more important than those hundreds of years of sentences that were rendered to my clients and other freedom-seeking individuals, accused of crimes they had not committed.”
—Nasrin Sotoudeh, in a letter she wrote to her husband in 2014

Although Sotoudeh has been banned from practicing law and has faced psychological mistreatment throughout her time in prison, she has never compromised her values. Even behind bars, Sotoudeh has kept fighting, refusing to appear at unfair trials and undertaking hunger strikes.  It is clear that in fighting for her own freedom, she is also fighting for the freedom of others, especially her fellow political prisoners in Evin. Writing about her own captivity, she uses the word “we” instead of “I” to describe her abuse, never forgetting the community for which she advocates.

In a letter written from prison on International Women’s Day, Sotoudeh implored the Iranian government to “end their animosity” toward the world and its own citizens, and asked human rights defenders around the world for support.