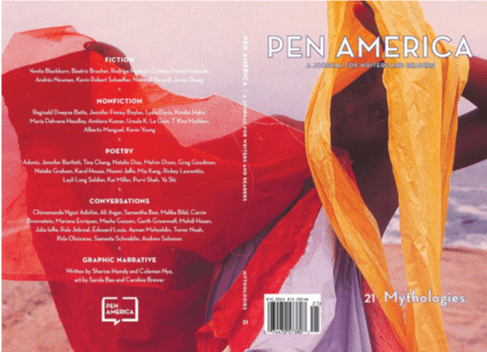 I grew up in India hearing about Mahatma Gandhi, and when I think about myths it is his bald, bespectacled head that comes to mind. This is not to suggest that Gandhi, a bamboo staff in hand, stands at the mouth of the dark cave where all falsehood is stored. No, what I want to convey is my early sense that there are people and events that achieve a certain fictionality. Stories become attached to them. As a writer, this aspect of life is of great interest to me. What’s even more fascinating is the way in which other stories take root in the shadow of the mythical figure. Here’s a fragment from a report that I read in a magazine about the aftermath of Gandhi’s assassination on January 30, 1948. It is a story that is so good that I haven’t tried very hard to find out whether it is true or not; when I first read this account fifteen or twenty years ago, I copied and pasted it in the pages of my writing journal: 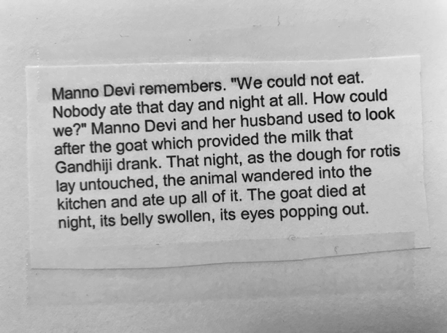 But that was then. In the wake of the Trump presidency and more generally the emergence of social media as a breeding ground for all kinds of falsehoods, the writer in me stands challenged. Where is the truth? How to distinguish fiction from malicious and destructive fake news?

In India, with the rise of right-wing Hindu ideology and the dominance of Narendra Modi’s party at the center, it has become fairly routine to encounter lies about minorities. Such lies have had lethal consequences, especially for Muslims and Dalits (people belonging to lower castes, some of them still considered untouchable by their compatriots). Fake news circulated through doctored videos on WhatsApp and Facebook have led to lynchings and riots. In these circumstances, even the laughable attempts by state functionaries to share mythologies, extremely suspect ones at that, take on a very dangerous aspect. These myths function to remove any rational basis for truth; instead, they promote blind faith and a vulnerability to rumors. I began this piece by talking about Gandhi’s goat; let me end with another example from the animal kingdom. On his retirement from the Rajasthan High Court last year, a judge in India said that the peacock, the national bird, was “pious.” The judge described the peacock as a lifelong celibate creature. Instead of mating with the peahen, the learned judge said, the peacock sheds tears. The peahen gets pregnant by swallowing the tears of the peacock. It was for this divine reason that Lord Krishna wore a peacock’s feather on his head.

For a long time, I thought I didn’t exist.

After all, if there weren’t any stories about people like me, there was no evidence that anyone like me had ever been here at all. It was like walking on a long-deserted beach without any footprints.

Not that the gender business didn’t surface now and again in books—Huck Finn dresses up like a girl, briefly, and Rosalind disguises herself as a young man in As You Like It. There are lots of others too, of course. But these are just ruses.

The only person whose transformation was bona fide was Tiresias, turned into a woman for seven years after striking a pair of magical snakes. But then he goes back. I don’t know. Maybe he was homesick.

I know about homesickness. Especially the kind you feel for a place you have never been.

There are times when I think the only reasonable way to explain trans issues is to talk about diaspora, or immigration. I was born in a country other than the one where I have come to live. It’s a long way off now, the country of my birth, but I remember it: dear old Boy-land. I got my green card as a woman many years ago, and became a citizen of this new place, Girl-land. Some people think I speak with the hint of a foreign accent—the country of my birth. That may be so. But Girl-land is the country that I dreamed of as a child, the place that called out to me from far across the sea.

In one, Tiresias accidentally saw Athene naked while she was bathing, and he was blinded either as punishment, or as penance. I know one trans woman who swears she became trans while she was riding her motorcycle one day and was stung by a bee, thus supposedly throwing her whole endocrine system into shock. I know trans people who point to medical studies that trace the genesis of our curious identity to structures within the brain—the bed nucleus of the stria terminalis of the hypothalamus, in fact. There are lots of theories. Are the stories of psycho-neurology so much more implausible than the ones involving magical bees? You tell me.

I don’t know why I am the way I am. All I know is that my earliest memory is of knowing who I was, and simultaneously understanding that embracing this self would cause unending damage and shame. My mother was ironing my father’s shirts that day. I lay on the floor. Sunlight slanted through the window. She shook a blue bottle of water to create steam. “Someday you’ll wear shirts like this,” she said.

I listened to her words as if they were in a language I did not know.

Blessed with the gift of prophecy, Tiresias keeps turning up in Greek drama—he has a cameo in The Odyssey (in Hades), and in Oedipus Rex, too. He’s full of insights. But he never says what it was like to be a woman. In all the legends written about him, his experience in the female sex remains a mystery.

Since my own transformation twenty years ago, I have tried to tell the story—but I have wondered, at times, whether Tiresias had it right. Maybe he never spoke of his womanhood because transfiguration defies language.

But I keep on writing, in the hope that some lost soul, someday, will find some version of this tale. Maybe they will see my footsteps on the beach and think, I do exist. Someone has been here before.