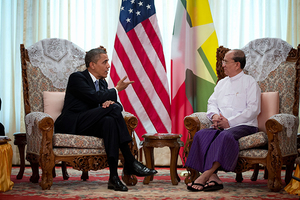 Last week a joint PEN America and PEN Myanmar delegation visited Washington for a series of high-profile meetings with officials from the White House, the State Department and Congress. We were informed during one of those meetings that free expression issues were not one of the four major issues on the Administration’s list for Myanmar engagement during President Barack Obama’s current visit, but would now be added.

Along with other civil society organizations, PEN’s lobbying efforts and subsequent membership engagement bore fruit on Wednesday with The Irrawaddy publishing an interview with Obama in which he spoke openly of a slow-down—and even backsliding—in the Myanmar reform process, referencing imperiled press freedoms and the case of a murdered photojournalist that was raised in our meetings:

Obama: “Former political prisoners continue to face restrictions. Members of the media have been arrested, and journalist Aung Kyaw Naing was tragically and senselessly murdered. […] the government of Myanmar has a responsibility to ensure the safety and well-being of all people in the country, and that the fundamental human rights and freedoms of all people should be respected. […] We want to see a Burma where there are no more political prisoners, where political parties can operate freely and compete in fair elections, and where journalists can pursue truth free from fear and persecution.”

PEN Myanmar President Ma Thida and Secretary Nay Phone Latt—imprisoned under Myanmar’s military junta—were unequivocal in their call for ongoing U.S. and wider international engagement on Myanmar, despite the challenges posed by an ongoing crackdown on press freedoms.

Obama’s public comments during his Friday visit to Yangon were more tempered, failing to adequately deal with the threats faced by Burmese journalists, and with other issues hampering the democratization process. The PEN delegation made the following requests of U.S. officials in Washington D.C.: