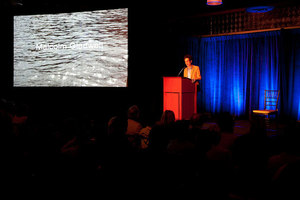 In order to understand the phenomenon of the “graveyard spiral,” the cause of John F. Kennedy Jr.’s plane crash, Malcolm Gladwell set out to experience it for himself. Here, he reads from his essay describing the harrowing event at Opening Night: Written on Water, part of the 2011 PEN World Voices Festival.