Watch: After Charlie – What’s Next for Art, Satire, and Censorship? 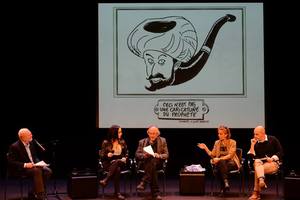 The night was packed with thoughtful discussion on the state of cartooning and satire, both in the U.S. and abroad. One exchange that remained with PEN staff started with Molly Crabapple’s comment that cartooning is and should be particularly “inflammatory” because “it is visceral and irritates authoritarian assholes.” Crabapple’s point was meticulously unpacked as Art Spiegelman and Françoise Mouly discussed the ideas and editorial process that went into The New Yorker’s most memorable and controversial cover illustrations, among them the “41 Shots” cover printed in the wake of the notorious police shooting of Amadou Diallo. Of one of his other covers, the Valentine’s Day illustration that depicted an orthodox Jew kissing a black woman, Spiegelman said, “I got people from both communities mad at me for that.”