Tony Kushner on Politics as Story 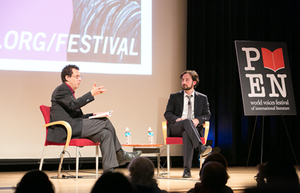 With Melville’s prayer, “Better to sink in boundless deeps, than float on vulgar shoals” as his guide, Angels in America author Tony Kushner has tackled some of the most charged subjects of our time. For the third and final installment of our Dialogue Series, “What to Do with Literature,” the Pulitzer Prize-winning playwright discusses with Jeremy McCarter both the “how” and “why” of political subject matter, including his rejection of polemics in favor of what he calls “a dialectically shaped truth,” as well as the rewards and challenges that come with this literary territory.