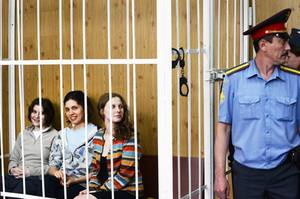 PEN American Center and The Public Theater presented a program in support of writers and artists who have been imprisoned or imperiled for speaking truth to power. In “Thought Is Free”, high-profile champions of free expression read a story by the Ethiopian journalist Eskinder Nega, a statement from the Chinese artist Ai Weiwei, and a text from the trial of the Russian punk band Pussy Riot. This Public Forum program coincided with the world premiere of Nathan Englander’s play The Twenty-Seventh Man, about Yiddish writers imprisoned by Stalin. The evening concluded with Salman Rushdie joining Englander onstage for a conversation about The Twenty-Seventh Man, Rushdie’s new memoir, Joseph Anton, and the responsibilities of the artist. Legendary journalist Carl Bernstein read a story by Eskinder Nega, the Ethiopian reporter whose arrest on terrorism charges has been protested by PEN, Amnesty International, the Committee to Protect Journalists, and the U.S. State Department. The Iranian-born artist and filmmaker Shirin Neshat read a statement by Ai Weiwei, the Chinese artist who has been barred from leaving the country because of his criticism of the government. Lou Reed, the rock icon and frontman of the Velvet Underground, read a text from the Pussy Riot trial, which sent three members of the Russian punk band to prison. Two of them remain in jail.