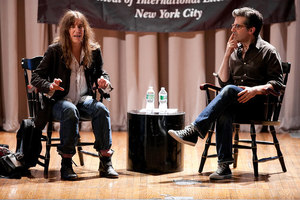 With Jonathan Lethem and Patti Smith.

Dont miss this conversation with two New York icons. Patti Smith burst on to the New York punk scene with her 1975 seminal album Horses. A bright flame in music for more than three decades, she has influenced the likes of REM, The Smiths, and Garbage. She is an acclaimed visual artist and poet, and recipient of a Commander of the Ordre des Arts et des Lettres from the French Ministry of Culture. Recently she released a memoir, Just Kids, about her friendship with photographer Robert Mapplethorpe. Jonathan Lethems National Book Critics Circle award-winning novel Motherless Brooklyn, about a detective with Tourette syndrome, had The New York Times crown him as something of a hipster celebrity. Hes also the author of The Fortress of Solitude and, most recently, Chronic City. Together they talk about Just Kids and some of their shared passions along the way  the visual arts, literature (of course) and their love for the Chilean writer Roberto Bolaño.