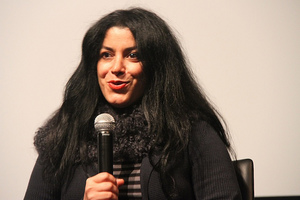 Using animation, film, and the graphic novel, the peerless Marjane Satrapi combines political history and memoir to depict a country’s upheaval through the story of one family. The day’s first screening featured Satrapi’s debut film, Persepolis, a poignant coming-of-age story told by a precocious and outspoken young Iranian girl that begins during the Islamic Revolution.

Satrapi was present at the screening to speak with graphic artist Françoise Mouly and MoMA’s Sally Berger about her strategies for storytelling in film. The event included a screening of Satrapi’s new film Poulet aux Prunes (Chicken with Plums), based on the graphic novel of the same name.

Co-sponsored by The Museum of Modern Art.