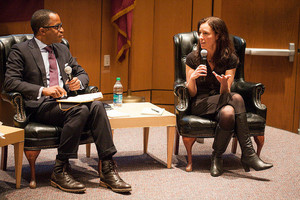 The New Yorker’s Amy Davidson and the Washington Post’s Jonathan Capehar debated before a packed audience of writers, scholars, and lawyers over the fate of NSA whistleblower, Edward Snowden.

Inspired by debates playing out on a national scale, Davidson and Capehar weighed in on the prospect for clemency for Snowden—an issue that has polarized the media and Washington policy circles.

While many in the audience remain largely divided, Moderator and New York Times Assistant General Counsel and Vice President, David McCraw, ends the session with a pointed question on everyone’s mind, “What will be the rules for the next ‘Snowden’?”