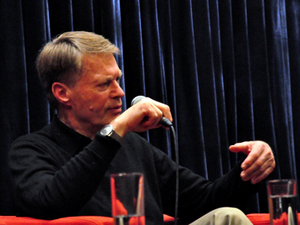 An avid traveler, French novelist and essayist Le Clézio has written more than 40 books about exile and self-discovery, and the clash between modern civilization and traditional cultures. In announcing the prize, the Swedish Academy called Le Clézio an author of new departures, poetic adventure and sensual ecstasy, explorer of a humanity beyond and below the reigning civilization. He is joined in conversation by The New Yorkers Adam Gopnik.