Faith and Free Speech: Defamation of Religions and Freedom of Expression 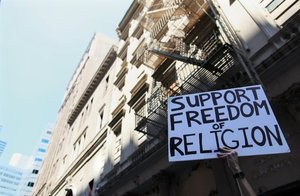 International PEN and its national centers are extremely concerned about ongoing processes in the United Nations aimed at combating defamation of religions. We are also concerned about an initiative by the UN Ad Hoc Committee on Complementary Standards, established in 2007 by the Islamic Conference (OIC) and a group of African countries, to draft a treaty that would ban religious defamation. Human Rights protect individual human beings, not institutions or religions. Criticism of religions and religious practices must be allowed, in particular when religions are viewed from a political point of view. As organizations representing writers, artists, and journalists of all faiths and none, we warn against any regulations prohibiting criticism of any religion or any set of ideas.

Against this background we have asked a group of high profile scholars, writers, and human rights defenders to join us for a side event in Geneva on the afternoon of September 16 in Room XXI of the UN Building.