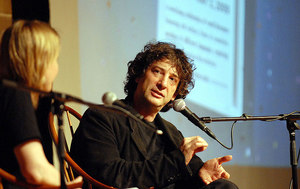 Internationally celebrated author Neil Gaiman has written across a variety of literary fields, including short stories, novels, graphic novels, comics, and films. He is the creator of the enormously popular Sandman series of graphic novels, and Coraline, which was recently adapted to the big screen. Join Gaiman for a discussion of imagination, inspiration, and creativity across a dizzying range of genres with World Voices Festival Director Caro Llewellyn.