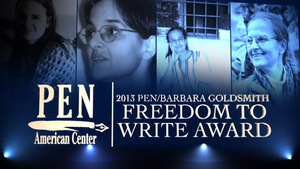 Ayşe Berktay, recipient of the 2013 PEN/Barbara Goldsmith Freedom to Write Award, is a translator, scholar, author, and cultural and women’s rights activist who is on trial in Turkey on spurious terror charges stemming from the peaceful expression of her views. She is one of more than 1,800 people, including many writers and academics, who have been swept up in mass arrests of supporters of Kurdish rights in Turkey. After spending more than two years in detention, Berktay was released pending trial on December 20, 2013. Her trial is ongoing.