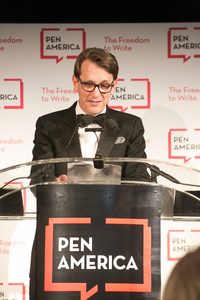 Hachette Book Group CEO Michael Pietsch, a PEN America Trustee, has worked as an editor to David Foster Wallace, James Patterson, Donna Tartt, and others, championing the power of the unrestrained word. Pietsch has also contributed vocally to the conversation about publishers’ roles in the changing landscape for writers, publishers, booksellers, and readers. Michael Pietsch delivered these remarks at the 2016 PEN Literary Gala.

Thank you Donna Tartt, for that kind introduction, and for your glorious books.

I want to thank my wonderful colleagues at Hachette for their very hard work preparing for tonight, and soliciting contributions, as so many have done, especially: Sophie Cottrell, Eve Rabinovits, Reagan Arthur, Jamie Raab, Megan Tingley, Ronald Blunden, and Hachette Livre’s global chairman Arnaud Nourry, who is here with us tonight.

Thank you to all the writers supporting PEN by gracing this dinner, especially those published by Hachette—thank you for trusting us with your books, and for your partnership. Thank you to all the warm and generous colleagues here tonight: publishers, literary agents, booksellers, manufacturers, paper makers, legal counsel, and other friends. We are fortunate people, drawn together in this ancient and delightful work connecting writers to readers.

And thank you, most especially, to the redoubtable J.K. Rowling for being with us tonight.

The first rule with PEN is: If they ask you, say yes. It’s an honor to be singled out by them in any way, and I thank them for this singling-out. We’ve all been singled out by being included here, and I want to thank everyone who has donated so generously to PEN this evening. Especially those of you who are here for the first time—I hope that you will be moved to join in PEN’s work, and to return year after year.

Because what PEN does is elemental to the business of publishing. Free speech and the freedom to write are the foundation upon which most of the people in this room earn their living. Those of us on the publishing side like to think that writers have many supporters, and we can lose sight of what a solitary endeavor it is to create works out of nothing but your ideas and your words. Solitary, daring, and sometimes dangerous work. Sometimes literally death-defying work. At the times that writers are at their greatest risk, and most alone, when there is no publisher or other supporter in sight, it is important to know that PEN is there, watching, listening, speaking out, fighting for writers.

And this is a very serious moment. Many writers’ lives, livelihoods, and freedom are in peril today. When truth and creative expression are met in so many places with censorship, disenfranchisement, with violence, with worse—it is a serious time. All over the world, writers are in peril.

We hear a lot, here in New York’s echo chamber, about the publishing business being in peril. I enjoy reading histories of publishing, because of how comforting it is to read that publishers have always believed they are about to perish. Postal regulations were going to destroy us in the 1800s, and at the start of the 20th century, the demon of discounting was considered so lethal that publishers fought the first discounter, Macy’s, all the way to the Supreme Court. And lost.

I don’t mean to make light of the challenges publishers and writers face in a business that has changed more in a decade than it did in the past century, or to dismiss the fact that in many parts of the world, publishers do face serious threats.

But in the U.S., book publishing is not in peril. We have our battles, but we find our way.

Writers and publishers have always needed each other, and we should have faith that in our ever more complex world, we always will. So publishers, let’s be optimists about our business. The serious issue today is not a threat to us, but the threat to the writer’s voice that is flashing around the globe and here in our cities, our campuses, our school boards, our statehouses. Let’s be brave, and not too safe, and remember to publish wild voices, diverse voices, voices that make us uncomfortable. Voices that can open eyes, and change minds, and last.

Everyone has their favorite memory of a writer’s work that changed their life or got them through a difficult time. I’d like to close with mine.

We’d had a death in the family, and Janet and I and the two children we had then, were driving home from emptying a parent’s house in Tulsa. We were Okies in reverse, heading east pulling a U-Haul full of photos and furniture and a beautiful yellow wheelbarrow. And we had a new novel with us, Harry Potter and the Goblet of Fire.

And we did something we’d never done before. The four of us decided to take turns reading aloud, a chapter apiece. And as we drove through Ohio and Indiana that amazing boy’s story came alive in our family’s voices, and it felt as if we were fighting alongside Harry. And his story brought us through grief and bad weather and all that corn, and delivered us home a little healed, and closer than we’d been before.

I want to thank PEN for their single-minded support of the writer’s voice and the freedom to write, which protects every family’s ability to find the books that can change their life.

I particularly want to say how fortunate we are, in this serious time, to have the energy, alertness, and articulate brilliance of PEN president Andrew Solomon and Executive Director Suzanne Nossel.