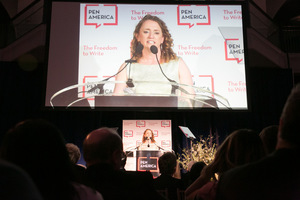 At PEN—you can tell—we love to celebrate. But we don’t celebrate just for the fun of it. Or even just to see all of you. We celebrate to propel the defense of free expression worldwide.

Tonight’s focus is on Egypt. For 30 years, Egypt was under the iron rule of Hosni Mubarak. Arrests, detentions, rampant corruption. For Washington, though, a cruel leader was also a crucial ally.

In 2010, Secretary of State Hillary Clinton told it straight to Mubarak and other Arab leaders: “The region’s foundations are sinking into the sand.” You can’t cling to the status quo.

That sand was slipping faster than anyone knew. A Tunisian fruitseller set himself on fire. His charred body became a symbol throughout the region for people burned by indulgent and indifferent rulers. We were rapt to our TVs and Twitter feeds as millions poured into Cairo’s Tahrir square. They painted signs, penned slogans, posted photos, protested, and proclaimed that nothing short of democracy would do. Mubarak shut down the internet, but he couldn’t shut down the will of the people.

Washington teetered between giddy and gloomy—was this the dawn of democracy or the descent of chaos?

When the government fell, artists rose: Dances staged outside the stock exchange. Revolutionary graffiti festooning city streets. A festival of literature, painting and puppetry on the square outside the presidential palace.

But freedom was fleeting.

That inspiring film footage we’d watched on YouTube began to rewind. The flags furling up. The graffiti erased. People retreating indoors. A uniformed leader—General Abdel el-Sisi—back at the podium.

A revolution vanished. Vanished save in the minds of individuals. People like Ahmed Naji.

In a different life he’d be living in Bushwick. He’d be the guy with the mustache at tonight’s afterparty. Instead, he has given up his liberty to defend the fading freedoms of 82 million Egyptians.

If sex and drugs in a novel could land you in jail in the United States, let’s face it. Most of the writers in this room would be behind bars.

In January, Naji wrote: “The problem has become, not that the regime pursues its opponents but that it hunts down all signs of life. Culture and art are forbidden.”

While at first, our government withheld aid from el-Sisi, now the funds are flowing.

U.S. officials say we need their help against ISIS. That these are hard choices. Making those hard choices is the role of a government official.

PEN America’s role is different. Our role is as a voice of conscience weighing in on those deliberations. Proving that the pragmatism of our government doesn’t negate the principles of our people. Reminding our leaders that trading away human rights for stability is a fool’s bargain; you end up with neither.

That is what makes the PEN/Barbey Freedom to Write Award so important. This award is an antidote to impervious strongmen and indifferent peoples. A clarion call that throws the weight of the world’s greatest writers, publishers, editors, and the entire creative community on the side of freedom, the side of Ahmed Naji.

The legendary Egyptian feminist Nawal el Saadawi was once told by her jailer, “If I find pen and paper in your cell, it is more dangerous than if I find a gun.”

Yet Ahmed Naji is writing a novel in his cell—not even his jailers can deny his imagination.

Creative freedom is what makes societies not just democratic, but dynamic and alive. In a world where creativity can be a crime, a world with prosecutions of the imagination, a global organization of writers is as essential as a group of lawyers, doctors, or diplomats.

We all strive to save lives. For PEN’s work to be done, we must not just save a life but also sustain the life of the mind.

More and more when writers are arrested or murdered, government officials now call us to find out what PEN knows—or thinks—or can suggest. Sometimes they take our suggestions.

More and more writers reach out to us because they know that when they write a provocative scene, or probe a controversial theme—wizardry and magic, perhaps—PEN is behind them.

They know that when their book is seized, their magazine shuttered or their publisher disappeared, PEN is behind them.

They know that when they are silenced or excluded because of race, gender, religion, or walls built on borders, PEN America is behind them.

And thanks to all of you we’ve been able to expand our membership, our programs, our resources, our visibility, and our impact to keep up with those rising demands.

If there is hope for Egypt’s unfinished freedom, it lies with the young and undaunted: Ahmed Naji and his friends. They are at the frontlines of peaceful change in Egypt and together we are the supply lines—supplying support, protection and voice.

When I first entered human rights work, I was surprised to learn how much focus there still was on letters written to prisoners of conscience. It seemed so 1970s.

But there’s no Wi-Fi in jail. That snail mail is a jailed writers’ only connectivity.

I knew 2 brothers who spent 3 years together in Tehran’s dreaded Evin prison. Activists from around the world sent them letters. To this day, they carry around those letters. They bring them to events in a suitcase.

They talk about what it meant in their prison cells to know they were not alone.

A few moments ago, we honored J.K. Rowling, partly for books that some call fantasy. Now I want to share what some might call a fantasy.

Look up there on the balcony. Now imagine a lone figure who emerges unannounced, dressed for a party, mustache and all.

It is Ahmed Naji smiling and free, carrying a copy of his new novel—and a suitcase of letters he received from all of us.

We are going to write those notes in just a minute—all of us are—but before we do, it is my pleasure to introduce Ahmed’s brother, Mohammed Naji.