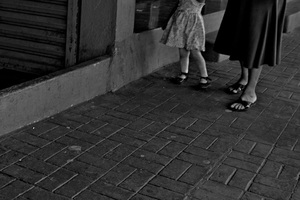 This week in the Guernica/PEN Flash series, we feature a piece by Elisabeth Frost. Subscribe to the series and get new flash delivered to your inbox twice a month—no spam or news, just stories.

It’s simple. There is the mother and there is the daughter. Large hand and small. Knowing things and not. It’s the mother who sets up can and can’t. The mother who gives happiness and unhappiness. Gives birth to yes and the everlasting no.

But then there are daughters who become mothers, confusing the story because as mothers they remain, by definition, also daughters. How do they know which they are? When they come to the curb, are they allowed to cross?

Then there are the daughters who act as mothers, who are not the mothers, biological or adoptive, to any child, but rather who try forever to give birth to their own mothers, enormous weighty babies curled up inside them, hiding in the daughter’s placenta, doubled over in grief, while the daughter, the one they think they made all by themselves, holds the hand, and holds also the head, unwise and old and greedy, the enormous unconscious head, which refuses to move, refuses to think, let alone come out from between the daughter’s skinny, uncapable thighs.