Mortal Gods in the Greek Sea 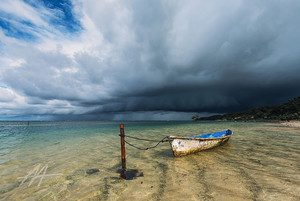 This week in the Guernica/PEN Flash series, we feature a piece by Burhan Sönmez. Subscribe to the series and get new flash delivered to your inbox twice a month—no spam or news, just stories.

Sönmez will be participating in the events Literary Quest: Westbeth Edition on April 28, and Ninety Minutes, Three Minds on April 29 at the PEN World Voices Festival.

You are on the side of the full moon. Your wet hair glistens. The crowd surrounding you is a flurry of movement. Arms, heads, even legs, rise and fall. I lose sight of your face. Like all the rootless people who have traversed this sea for centuries, I too beseech God. Until your face reappears among the crowd. You hold onto the shoulder of someone beside you. Your hands are trembling with cold. I can pick out your voice in the chaos.

I remember the first day I heard your voice. I was sitting in the school canteen, eating my lunch and skimming through my notes from that day’s mythology lesson. The sound of your laughter broke my concentration, and when I looked up I saw you at the next table. After that, my days revolved around the echo of your laughter. In class, on the playground, in the street. Your beauty gave me hopelessness rather than hope. In the canteen, I sat at the table beside yours, in class at the desk behind yours, but I couldn’t pluck up the courage to take the final step. I was like the man we learned about in the mythology lesson, who somehow never manages to push his rock up to the peak.

One quiet day close to the exams, I was copying out my notes. You came and stood beside me. You brought your face close to mine. You said lesson, you said exams, you said you take the best notes in class. I replied yes to everything you said. You took the notes in front of me. You returned them the next day. I got your telephone number. I called you the next day. We met in the café opposite school. It wasn’t until several days later that we confessed to each other that we had had the same dream at the same moment.

We had no idea that a livid war was advancing on us like a sandstorm. We were committed to life, not death. We believed in the near, not the far, and not in leaving, but in staying. We couldn’t understand how our lives had been overturned in an instant. As we witnessed cities in ruins, women being sold in slave markets, we felt as though we were in a dream. The news channels did not speak of us, but of the nation, of religion and oil. The politicians’ faith was invested in one little word, victory. No one saw us.

Now we are on the Greek Sea, setting out towards a new horizon. There is nowhere for us to hold onto, I have no idea how many of us there are, we are all trying to fit into a flimsy boat. Clouds shroud the full moon. As the waves strike, our boat rocks from left to right. Once again I search for your face, which has disappeared in the darkness. I call out your name. I shout against the wind until my lungs are about to burst. Those who have fallen into the water are struggling. The women’s and children’s screams intermingle. No one trusts in the full moon, the boat, or the life jackets now. If we turn back, our home is far away; if we continue, the sea is endless. You are there. I can hear your voice. Without considering yesterday, tomorrow, or now, I jump into the water and swim towards you. I want you to believe in me, not in the dark. I listen to the voices behind each wave, and I defy the darkness like an enraged god.

Born in Turkey, Burhan Sönmez worked as a laywer in Istanbul and was a founder of the social-activist culture organization TAKSAV (Foundation for Social Research, Culture and Art). After a 1996 incident with the Turkish police in which he was assaulted and badly hurt, Sönmez left for rehabilitation in Britain with help from the Freedom from Torture foundation, and he continued to live in political exile in Britain. He is the youngest recipient of the Sedat Simavi Literature Prize for his second novel, Sins and Innocents. A member of both English PEN and Turkish PEN, Sönmez’s latest novel, Istanbul, Istanbul, debuts this spring from OR Books.

Ümit Hussein is a British translator and interpreter of Turkish Cypriot origin who was born and raised in London. She has a degree in Italian and European Literature and taught English in Spain and Japan, before going on to the University of East Anglia to do an MA in Literary Translation. She has translated authors such as Nevin Halıcı, Mehmet Yashin, and Ahmet Altan into English. After a spell in France and Portugal, she now lives between Seville and London, and combines her literary pursuits with interpreting.