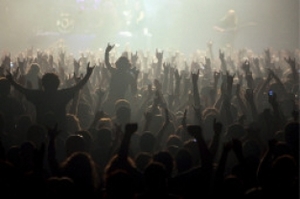 This piece was selected for the PEN World Voices PEN/Guernica Flash Series—one piece of flash every day throughout the festival. It’s also featured in the 2014 PEN World Voices Online Anthology.

They told us to wait back stage and not to go too far, well who’s going to move? There’s no other place in the universe I’d rather be.

I mean, ok, we arrived a little early. We were afraid of unforeseen circumstances during the trip, like a flat tire or a tsunami that would wash away everything between the Marina of Pisa and here, or giant rats born in the venomous water of the ditches that would lay waste to the province. But nothing of the kind happened and so we’ve been back stage for four hours now. As a matter of fact, when we arrived there wasn’t even a stage, they were still putting it up.

But now it’s eight o’clock and the first band is almost done. Ten groups, one after the other, four numbers each, and we’re next. We have to play while it’s still light out. I would have preferred pitch black, it’s more scenic, but this is ok, too, no problem. We’re a war machine, a hand grenade tossed into the middle of the crowd, and when a bomb explodes it always does damage, dark or no dark.

You can tell we’re not fooling around from the way we look. We’re all in leather pants, chains across our chests, different kinds of studs on our belts, our armbands, and even around our necks. As well as combat boots, windblown hair, and T-shirts of the historic groups that influenced us the most (except for Giuliano, who is of course bare-chested).

All of us except Antonio.

He can’t keep up with the pace. The best he could do was a studded belt around his waist, as thin as the ones girls wear, no chains, and hair that is neither long nor short that he slicks back with gel. WITH GEL! If you were to take a picture right now, we would look the fiercest band in the world joined by a passer-by asking us for directions to a disco.

In the meanwhile the group on the stage is starting its last piece. They’re doing reggae (what else) but none of them wear dreds, and from the looks of them they don’t even smoke ganja. I bet that four out of five of them studied music at the parish and on Sunday mornings they play acoustic guitar at mass. They end with a cover of Bob Marley, No Woman No Cry (why am I not surprised?). Except since the rule is to sing in Italian, it becomes No donna no piange, and instead, in my opinion, there’s a lot to cry about. But the crowd applauds, someone shouts out “bravi” and someone “bravo,” maybe for one member of the band, or maybe for Bob Marley.

What do we care, we’re here to tear the house down, Bob Marley and the Sundays at church and the ears of these people who came here by chance and don’t realize how lucky they are. Like the people who one night in 1969 went out for a beer and saw Black Sabbath at the pub, like the ones who lived next-door to the garage of Ron McGovney and from their back yard could hear Metallica getting ready to change the world. These guys in Pontedera don’t realize it but one day they’ll be able to say I was at the first concert of Metal Devastation.

This piece is excerpted from the novel, Live Bait, by Fabio Genovesi. Michael Moore’s translation of the collection is forthcoming from Other Press, 2014.