Meet the Judges for the 2015 PEN/Fusion Prize 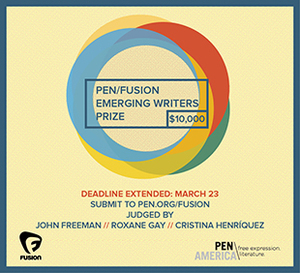 PEN is now accepting submissions for its newest literary award, the PEN/Fusion Emerging Writers Prize. All eligible applicants will have the chance to have their work read by distinguished award judges John Freeman, Roxane Gay, and Cristina Henríquez and the winner will receive a $10,000 cash prize.

This award was established with the generous support of the news, pop culture, and satire TV and digital network Fusion, whose dedication to recognizing young and diverse voices has made for a unified partnership with PEN.

The deadline for submissions for the PEN/Fusion Prize has been extended to March 23, 2015. For more information on the award, including eligibility requirements and application guidelines, please visit PEN.org/fusion.

John Freeman is the author of The Tyranny of Email and How to Read a Novelist. The former president of the National Book Critics Circle and editor of Granta magazine, his work has appeared in The New York Times, The New Yorker, and the Paris Review. He now teaches writing at NYU and the New School University. Starting in the fall of 2015 he will launch Freeman’s, a biannual literary journal and anthology which will be published by Grove Press. His most recent book is Tales of Two Cities: The Best of Times and Worst of Times in Today’s New York, which he edited in benefit of Housing Works. He lives in New York City.

Roxane Gay is the co-editor of PANK Magazine and author of the books Ayiti, An Untamed State and Bad Feminist. Her pieces have been published in numerous      anthologies and periodicals, including Best American Mystery Stories 2014, Best American Short Stories 2012, Best Sex Writing 2012, A Public Space, McSweeney’s, Tin   House, Oxford American, American Short Fiction, West Branch, Virginia Quarterly Review, NOON, The New York Times Book Review, Bookforum, Time, The Los Angeles  Times, The Nation, The Rumpus, Salon, and many others. Her memoir Hunger, will be published in 2016.

Cristina Henríquez is the author of three books, as well as numerous fiction and non-fiction pieces published in The New Yorker, The Atlantic, Glimmer Train, The American Scholar, Ploughshares, TriQuarterly, The Oxford American, Preservation and AGNI along with the anthology This is Not Chick Lit: Original Stories by America’s Best Women Writers. She was featured in Virginia Quarterly Review as one of “Fiction’s New Luminaries,” and is a recipient of the Alfredo Cisneros Del Moral Foundation Award. Her newest work, The Book of Unknown Americans was a New York Times Notable Book of the Year for 2014.

On the 75th anniversary of a democratically challenged India, @PENamerica has collected musings from a slew of notable Indian and diaspora writers. I am honored to be among them. Do take a look and read. Thank you @suketumehta @saliltripathi Kiran Desai https://pen.org/india-at-75/?utm_source=twitter&utm_medium=social&utm_campaign=social-pug

As India celebrates #IndependenceDay2022, what should be a moment of celebration and joy has become a moment of deep despair and reflection.

Through our #IndiaAt75 project, PEN America is uniting authors to both write about—and defend—free expression and democratic ideals.