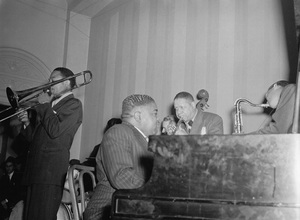 Alain Locke
The younger generation comes, bringing its gifts. They are the first fruits of the Negro Renaissance. Youth speaks, and the voice of the New Negro is heard…. Here we have Negro young, with arresting visions and vibrating prophecies; forecasting in the mirror of art what we must see and recognize in the streets of reality tomorrow, foretelling in new notes and accents the maturing speech of racial utterance.

Claude McKay
The Harlem Renaissance movement of the antic 1920s was really inspired and kept alive by the interest and presence of white bohemians. It faded out when they became tired of the new plaything.

Langston Hughes
The ordinary Negroes hadn’t heard of the Negro Renaissance. And if they had, it hadn’t raised their wages any.