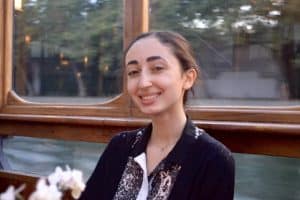 Today, we feature an interview with Sara Abdelbarry.

Yes, I am a Muslim. And proud to call myself one. I come from a family of Egyptian Muslims. I have an interesting relationship to the word Muslim, because while it is what I identify as, it seems like many people who I meet struggle to associate me with the word. I am a young Muslim woman who doesn’t wear the hijab, and that notion is so unsettling for so many people. When I reveal myself as Muslim to people—and “revealing” is really what we Muslims do nowadays—they immediately ask me why I don’t cover up/wear the hijab. It’s a strange thing. The Muslim woman and the hijab are inextricably linked and those who don’t wear it are, in my experience, viewed as these sort of super-liberal Muslims who just like to call themselves Muslim but don’t actually follow most aspects of the religion. I don’t think this is true. A headscarf does not a Muslim make. Islam is centered on faith and Allah, not physical appearances. I know many Muslim women who do not cover up who are more religious than women who do cover up. I mention this because it is so central to my experience growing up as a Muslim woman in the United States. My belief is strong and that is what matters.

Being Muslim in America means you are blessed. It means being a member of a religion that some of your fellow Americans respect, admire, and seek to learn more about. It also means loving your religion deeply, yet seeing it being targeted and deemed violent every time you turn on the television. Statistically, it means being a religious minority. It means that you may not feel acknowledged by your own president. Muslims may be born in the United States or live there for a majority of their lives and still be considered outsiders. As I see it, the Muslim is always the alien, no matter how long she has lived in America. We Muslims love America as much as the rest of you, but this is not what is broadcasted. Instead, we are inundated with accounts of terrorist attacks committed by Muslims. Being Muslim in America also means that you will never see a Muslim on television unless he or she is linked to terrorism or some act of violence. Growing up, I never saw characters who represented me on television. The Muslim on the American screen was always, and still is, playing the role of “terrorist #3.”

I feel that, in America, for the most part, Islam is fundamentally misunderstood. If I had to sum up the experience of being Muslim in America in one word, it would be Islamophobia. I feel that we Muslim Americans will forever be defined by and linked to the 9/11 attacks, which is a shame. I wish people would understand that a group of radical extremists do not represent the entire Muslim population. Most of us Muslims are friendly, moderate, and tolerant. We don’t say that massacre shooters who are white males represent the entire white population, so how are Muslims any different?

Many Americans, especially those living in more rural areas of the United States, probably don’t know many Muslims; and because of this, they have no way of truly informing themselves about the religion from a first-hand perspective. So, whatever these people learn about Islam will probably be from news channels or sources that have some level of bias and are thus unreliable. If more people really knew what Islam was all about, everything would be much different.

For me, being Muslim in America has also been characterized by non-Muslims trying to project their own views of what my religion is all about to the masses—whether these people be the president or Bill O’Reilly. The rhetoric that Islam is an “ideology” and not a religion is one I’ve heard all too often lately; and it’s really absurd. Yet it is believed by so many people and spread by certain media channels. It has always perplexed me how people who are not Muslim try to explain the religion. Where are they getting their information? Who’s paying them to say what they’re saying?

I feel that as a Muslim millennial, I have a responsibility to get people my age to speak out against Islamophobia. It’s one thing to post “Stop Islamophobia” on Facebook and another to actually try to effect change in the real world by rallying your community together—whether it be through powerful writing or an online campaign—and realizing that there is power in numbers. I hope that I’ll accomplish the latter. The Muslim-American community historically has not worked or rallied together in the way that it should. Imagine what we can accomplish if we put our insignificant differences aside and group together to educate people about our beautiful religion.

We need to save the name of our religion from being tarnished any further, but this won’t happen unless we unite. So, I guess this is a message to any Muslims who are reading this: I hope you’re listening and are ready to do so. Being Muslim is not about the divide between Sunni and Shi’a or conservative and progressive. It should not be about conservative Muslims chastising Muslim women who don’t cover their legs and shoulders, nor about bringing any of your fellow brothers and sisters down for selfish reasons. Instead, changing the current state of Islam in America is going to take selflessness, and once the Muslim community is ready to accept this and put group differences aside, we will be one step closer to where we should be.