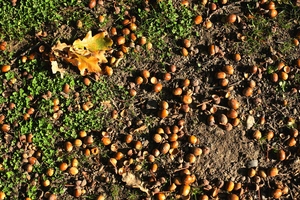 This week in the Guernica/PEN Flash series, we feature a piece by Ben Warner. Subscribe to the series and get new flash delivered to your inbox twice a month—no spam or news, just stories.

When I was young, we lived up North—a house with a sidewalk sheltered by an oak tree. I collected hundreds of little acorns in a handled plastic bag. It was a special bag, to me, because there was a hole in the seam—a hole just smaller than the acorns, themselves. When I held the bag in my fist and shook it up and down a single acorn would push from out of the bottom. I did this on the sidewalk when I was alone, and that single acorn would squeeze through and bounce on the concrete with the plastic thock of a ping-pong ball.

I would stoop to raise it from where it had settled in a crack, and hold it aloft like an explorer lifting a diamond to the light. I’d expect it to be different—greater than I’d first understood it to be—but it was always just an acorn.

My father was a broadcaster for Voice of America. He did the Bulgarian programs, though he only spoke English to me. I remember the year before he started, there were weeks at a time when he didn’t come home for dinner. Mom told me he was learning his Bulgarian again, that he’d forgotten it going to the grocery stores of America. There was a lot for him to cram into his brain, as he made a new life for us.

It was much later that he started working from our home. Every day, he’d read The New York Times in the morning and eat most of a bag of pretzels with his pot of coffee. This he did until lunch. Our kitchen became his never-ending breakfast. But because it was summer, and I was home from school, it only seemed natural that he would be home all day, too.

One night I woke and walked the hall toward their bedroom. A peach-colored light was within. I heard my mother’s voice, and froze where I was on the carpet. “At least we don’t have to pay for a camp,” she said.

In the afternoon, when my mother was at work at the doctor’s office, I celebrated each acorn birthed from the bottom of my plastic bag. Each one I held lightly in my palm—blowing on it to see it quiver, examining its ridges, squeezing it until the shell was as warm as my skin. Then I’d tuck it inside my cheek to suck on it and make my saliva taste like earth. That acorn would become my “lucky” acorn.

Each lucky one had a limit, though. It could only be lucky for so long. When it was done, I would put it back in the bag and shake it up so that what had once been a concentration of good fortune was spread out amongst the others. I kept the bag beneath my bed and carried it to the sidewalk in secret, though there was no one else outside to see me.

One morning, my father looked up from his paper.

“Where are you sneaking off to, my little thief?” he asked. In the not so distant past, I’d had some problems with stealing.

He pressed his thumb into the newspaper as though he were squashing a bug that had wronged him.

“Nowhere,” he parroted. He stared at the refrigerator door. All the magnets had been cleaned off, as if in preparation. “I am familiar with nowhere.”

“It’s okay, Daddy,” I said, remembering how my mother said it.

He sat there for a while, holding me with his silence. “I am okay,” he said. “You’re right. It is Reagan who is not okay. You don’t understand this, but he was in bed with the Communists.” He picked a pretzel off the table and bit it, sending a snow of crumbs onto his lap. “They relied on one another. It was only a matter of time. The Bulgarians here are not your Bulgarians. Remember that. They stowed away in German luggage at the end of the war. They weaseled their way into this country any way they could, and why? To call me a sympathizer? It could have been anyone, but they chose me. It could have been Ganchev or Stoev or Kaziyski. Anyone looks guilty when you say they’re guilty. You’re just a boy,” he said, putting his hand on my head. He had big, thick, damp fingers. “You only need to worry about whether the sun is shining. Your grandfather was in Berlin during the war. He could see the paper to read at night there was so much bombing.”

Then he said, “You don’t know what to say,” because I stood there dumbly with the bag of acorns hanging from my hand. He met my gaze. It seemed so long since we’d looked into each other’s faces. He had dark bumps in the circles beneath his eyes, and I was startled. It was as if I’d walked down the wrong staircase, and into someone else’s kitchen—that I’d arrived before someone else’s father.

“You have so much,” he said. “To ask for more would be ungenerous.”

Ben Warner lives in Baltimore, MD. His first novel, Thirst, will be out in April 2016.