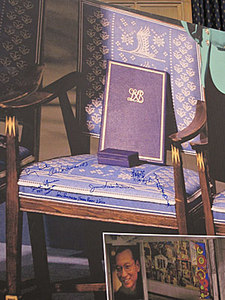 Today marks three years since Liu Xiaobo was detained and began an odyssey into China’s legal system, which ruled him a “criminal” for his writings and sent him to prison for 11 years. Tomorrow is the three-year anniversary of Charter 08, the groundbreaking manifesto drafted by Liu and his colleagues, now signed by nearly 13,000 Chinese citizens. And then there’s Saturday, December 10: the one-year anniversary of the Nobel Peace Prize ceremony, where Liu’s absence was marked with an empty chair.

On Tuesday, I was in Washington, DC with Marian Botsford Fraser, Chair of PEN International’s Writers in Prison Committee, who was testifying before the Congressional-Executive Commission on China about our imprisoned PEN colleague and prospects for freedom of expression in China one year after his Nobel prize.

In her testimony before Chairman Chris Smith and other House members, Fraser emphasized that Liu’s conviction, two years ago this Christmas Day, was based on seven phrases he penned in his essays and in Charter 08—a clear violation of Article 19 of both the International Covenant on Civil and Political Rights and the Universal Declaration of Human Rights, which guarantees the right to freedom of expression, regardless of frontiers, and which the government of the People’s Republic of China is required to uphold.

In none of these phrases did Liu call for the overthrow of the government. He merely expressed opinions, offered critiques of the current state of affairs, and propounded ways to make life in the People’s Republic of China better, more democratic, and more just.

Recounting the experiences of PEN’s delegation to China this summer, Fraser told the committee there are signs that the heavy-handed effort to silence Liu Xiaobo, PEN members Teng Biao and Ye Du, and others early this year, has not quashed dissent in China. Citing the collision of two high-speed trains outside Wenzhou the final weekend of the delegation’s visit, she observed:

The government’s attempts to cover it up—which included trying to literally bury the train at the scene—sparked outrage around the country; in five days, Chinese citizens posted 25 million messages critical of the government’s handling of the accident on China’s microblogs. That campaign, which seemed unprecedented in its breadth and tenacity, has since been emulated in several other scandals and tragedies. These widespread criticisms of course caught the eye of censors, but not before the government was forced to reverse course and, in some instances, apologize.

We are witnessing a “surge of activism, of citizens simply asking ‘why?’” in China, Fraser reported—a question that is starting to extend to political prisoners. Everyday Chinese are risking their safety to try to visit blind lawyer Chen Guangcheng, who is under unlawful house arrest with his family—much like Liu Xiaobo’s wife, Liu Xia—following his release from prison. Thugs stand at the gates of Chen’s village, a visible warning to Chinese and foreign visitors alike that their presence is most unwelcome. Often those warnings are expressed with fists and blows. But the visitors are undeterred. Despite the threat of beatings, they continue to try, to make the public pilgrimage to Chen’s village to see for themselves that China has imprisoned a free man, and to tell their friends what they saw. The ripple of questions and criticism has begun in China.

Will the Chinese people now start asking why their own Nobel Peace Prize laureate remains inside prison walls? His name remains largely unknown outside the human rights and scholarly communities in China, and many don’t even know that one of their fellow citizens won the coveted award. But the space for questions is opening up, as people find new ways to circumvent the heavy hand of censorship and to seek and impart information. The most important thing that we in the international community can do is to support this space, help it grow, and ensure that our calls for the release of political prisoners like Liu Xiaobo are heard, and reverberate, within the country.

Take action for Liu Xiaobo: Write a letter to the Chinese authorities, calling for his release.

Want to do more?