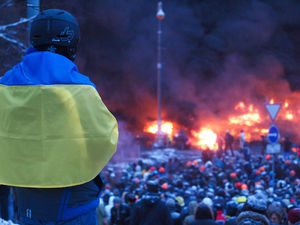 PEN International, the secretariat office of PEN Centers in over 100 countries, is closely following developments in Ukraine and Russia, working with local writers to highlight the region’s moral conscience and advocate a dialogue-based approach to the conflict. Later this week, we’ll feature the results of their upcoming meeting with writers from the region and around Europe.

This week, PEN International and Swedish PEN will bring together prominent Russian author Lyudmila Ulitskaya, leading Ukrainian writer and scholar Aleksandra Hnatiuk, Swedish PEN President and novelist Ola Larsmo, and writers from PEN Centres of Finland, Estonia, Slovenia, Norway, and Germany in Stockholm to discuss the increasing number of imprisoned and persecuted journalists in Russia and seek solutions to the ongoing crisis.

Following the escalation of violence in Ukraine after the Russian occupation of Crimea, Russian and Ukrainian PEN initiated a series of meetings for writers to debate and build solidarity, and to provide a platform for voices from all sides of the conflict. PEN International and its centres have since organised and participated in meetings in Kiev, Warsaw, and Bled, bringing together leading economists, scholars, artists, journalists, civic activists, and human rights defender to facilitate dialogue among writers from Russia, Ukraine, and across the region.

This meeting is being led by PEN’s International President, John Ralston Saul, its International Treasurer, Jarkko Tontti, and Executive Director, Carles Torner, and Chair of PEN’s Writers for Peace Committee, Tone Persak. Further information on the outcome of the meeting will be released on Wednesday, June 11.