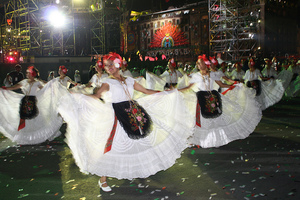 This text first appeared in The Dissident Blog at Swedish PEN and in the PEN International anthology Write Against Impunity. You can also read the manuscript in the original Spanish.

The Mexico City of my childhood was still a transparent, temperate and floral space, as it had been since ancient times and which, from the 30s until the end of the 50s, attracted many artists and poets and, specifically, surrealists.

In the city it was common to find, along with the first skyscrapers, innumerable light posts, trams, donkeys carrying wood or sacks of corn on their backs, tied turkeys carried by men with straw hats with wide brims like umbrellas. At that time there were still indigenous couples: men in white cotton trousers and women with a black or dark blue shawl. There were flower vendors, sweet potato vendors with small carts whose vapor chimneys sounded like a train whistle, rag sellers who pushed carts piled high with second-hand clothes and, sometimes, a bear trainer with a bear who had a ring in his nose as if the animal were a bull. Often we could look towards the east and see the Popocatépetl and Ixtlacíhuatl volcanoes and we could also cast our eyes toward the south and admire the black green woods of the Ajusco Mountain. In the first months of the year great white clouds appeared like monstrous fortresses in the air and, in June and July, torrential rains fell and transformed the city into a blue, silver color, which 500 years before had provoked fear and admiration in Hernan Cortez and his soldiers. Everything occurred in an unmoving voyage or, as Xavier Villaurrutia liked to express it, “Let’s go motionless on a voyage.”

Although the city was fairly calm, our parents warned us not to walk near the canteens and the pulque bars from which men with fierce looks stumbled out drunk and crooned, “Life is not worth anything, life is not worth anything. We start our life with a cry and end it with a cry. This is why in this world life is worth nothing.” This song by Jose Alfredo Jiménez expresses the nihilism that Mexicans enjoy but it is also, somehow, embodies a memory of the violent times of Mexico’s revolution. I also remember that when we walked near military zones our parents warned us that in the barracks soldiers and sergeants smoked a stinky and malevolent weed and that it was dangerous to hang out with them. In those times someone could burst out singing, La cucaracha / la cucaracha / ya no puede caminar / porque le falta / porque le falta / marihuana que fumar. Today that world, where even music embodied naïve or crafty songs that came from a realm between a tragedy and a children’s story, no longer exists or it has been transformed into a reality that is as unforgiving and vulgar as it is magnetic and awesome. The paradise of the Surrealists, the city that inspired Antonin Artaud, André Breton, Leonora Carrington and Sir Edward James, has become a modern or postmodern place that is so incomprehensible and overwhelming that no explanation can effectively describe what happens here. It is impossible to understand how a metropolis that has been so destroyed by time is able to survive with more than 20 million inhabitants and how, even though there is violence, it is relatively under control. Those of us who live here constantly search for points of concord and solidarity. This search was clear in the solidarity shown by Mexico City’s residents during the earthquake in 1985 and yet again when the demonstrations against violence took place in the city a few years ago, during the presidency of Vicente Fox.

The unrest in the city and in our country comes from poverty but it also comes from the predatory nature of Mexican politicians and businessmen who are like politicians and business people the world over. Nevertheless, the fundamental problem that makes this unrest become something untoward is drug trafficking, and the primary reason for this narcotic trade is not Mexico but the market and consumption of drugs in the United States. This situation makes Mexican corruption worse; however, one cannot deny the profound immorality of the USA, which finds it natural and logical to sell guns to criminals and people who traffic in both drugs and people.

Mexico longs for the paradise that it thought it lived in and that was exalted in Mexico’s movies during our Golden Age of cinema, when Maria Felix and Dolores del Rio graced our screens. Mexico dreams of the time it was “a big ranch,” before businessmen and politicians ruined it in the deceitful name of development. But the lost dream, the lost paradise of a naïve country does not justify that we have become hostages to the drug traffickers and arms dealers. In the words of Dr. José Narro Robles, the dean of the Universidad Nacional Autónoma de México, “Our nation does not deserve this destiny.” This “dance of vampires” comes more from the depravity and machismo of the United States than from the machismo and brazenness of Mexico. Without a doubt, I feel sure that the solution to this problem is the legalization of drugs and stronger gun control but this will take valor and it is a moral decision. Once and for all, the Mexican government must have the valor to stand up and blame the U.S. government for these problems. The people of the United States must realize they have a moral duty to acknowledge that, over time, their acceptance of guns has created the affirmation that evil is a principle on which the relationship between our countries is founded.

photo by spotreporting on a Creative Commons License