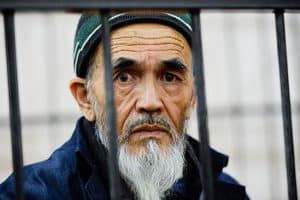 Askarov, a member of Kyrgyzstan’s Uzbek minority, spent his career exposing corruption. He was arrested during the inter-ethnic conflict that swept Osh and Jalal-Abad in June 2010 and convicted, on 15 September 2010, on charges of complicity in murder and inciting hatred in connection to his reporting on fatal ethnic violence.

In March 2016 the UN Human Rights Committee found that Askarov had been arbitrarily detained, tortured, mistreated, and prevented from adequately preparing his defence as well as being denied treatment for serious medical conditions. A number of the defence witnesses also told the court that they had been intimidated and threatened during the course of the first trial and there were serious failures in the investigation against him.

Salil Tripathi, Chair of PEN International’s Writers in Prison Committee said: ‘We call for the immediate release of Azimjon Askarov who has been denied due process for too long.  The latest decision by the Kyrgyzstan’s Chui Regional Court to uphold his life sentence is an appalling miscarriage of justice and is clearly yet another attempt by Kyrgyz authorities to supress free speech. PEN will continue to campaign for Askarov’s freedom as long as it takes, as long as he remains behind bars.’

Askarov was an honorary ‘Empty Chair’ at PEN’s 80th International Congress in 2014 in Bishkek, Kyrgyzstan, where his wife, Hadicha Askarova, made a moving personal appeal to PEN delegates. During its Congress, PEN delegations raised Askarov’s case directly in private meetings with both President Atambayev and the General Prosecutor, Aida Salyanova. Askarov also featured in PEN’s 2014 Day of the Imprisoned Writer Campaign.