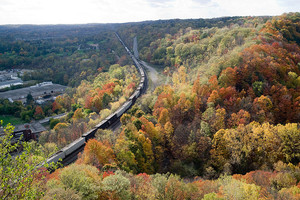 [that train line was never meant to go through town]

each had to resolve themselves with a different center

a place divided in half

what is observed is not always what is perceived

once the moment came it was too late to go back to the moments before
it. that’s the problem with time. we can’t control it.

it had been my desire to remain in the pre-moment state but time
disallowed this. vehemently. i took precautions. i invested in the pre-
moment. i built a future in the moment that came before the moment
that undid the future that was never to be a moment. and now i walk
away from the nonmoment directly toward foreseeable moments. it is
the commonness that kills me. each moment. it has been hard living
since the pre-moment. daily reminders of the same things. the daily wait.

there isn’t much here that i don’t know—that i’m not accustomed to.
sometimes i wonder if maybe i’m supposed to be learning to appreciate
the beating that the daily habits of others inflicts upon me. perhaps i was
too pleased with myself. before the moment.

the moment was like falling asleep. sometimes i think i am asleep. but for
the sleep’s duration…