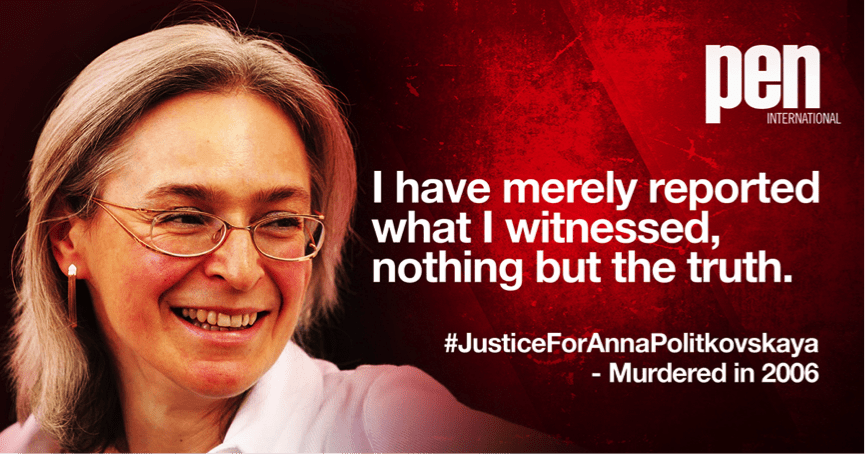 Justice for Anna Politkovskaya: End impunity for crimes against journalists in Russia

Anna Politkovskaya was a prominent Russian investigative journalist and writer who garnered acclaim for her coverage of the Chechen conflict, and who was a vocal critic of President Vladimir Putin’s policy in Chechnya.

On 7 October 2006, Anna Politkovskaya, who worked for Novaya Gazeta, was found dead in the lift of her Moscow apartment; she had been shot in the head, in what was clearly a contract killing. In 2014, after a lengthy trial, five men were convicted for Politkovskya’s murder. Yet that investigation has yielded little publicly about who wanted Ms. Politkovskaya killed and why. In an interview with the Committee to Protect Journalists, head of Novaya Gazeta’s department of investigations Sergey Sokolov said: “We are getting the impression that law enforcement is unwilling to get to the bottom of the crime chain, because, apparently, the mastermind is an influential person in the Russian power hierarchy”.

Impunity remains a serious concern in Russia, with the Committee to Protect Journalists recording at least 36 cases of murders of journalists in the country since 1992, the majority unresolved. Among them, journalist Akhmednabi Akhmednabiev was shot to death in 2015 outside his home near the Dagestani capital, Makhachkala. Today, three years later, no one has been arrested in connection with his murder.

In 2009, journalist and human rights defender Natalia Estemirova, a colleague of Anna Politkovskaya’s, was kidnapped and murdered in Grozny, Chechnya. Today, seven years later, her family are no nearer knowing the truth about who killed her and have petitioned the European Court of Human Rights about the flawed investigation into Estemirova’s death.

Please, stand with PEN America in calling on Russia to demonstrate its commitment to end impunity for crimes against journalist and to renew efforts to bring the masterminds behind the killing of Anna Politkovskya to justice.

To: His Excellency Vladimir Putin, President of the Russian Federation

On 7 October 2006, Anna Politkovskaya was murdered in her apartment building in central Moscow.  In May 2014 five men were finally convicted, after a lengthy retrial, of having been involved in Politkovskaya’s murder, including three who had been acquitted in a previous trial. In June 2014, all five were sentenced to prison terms, with two receiving life sentences.

Whilst welcoming this significant development, PEN America remains gravely concerned that those responsible for ordering the killing have not yet been brought to justice.

On the International Day to End Impunity for Crimes against Journalists, we call on the Russian authorities to demonstrate its commitment to end impunity for crimes against journalist and to uphold justice and freedom of expression by identifying and convicting all those masterminded Anna Politkovskya’s assassination.

Read more about injustices toward Russian journalists and bloggers>>