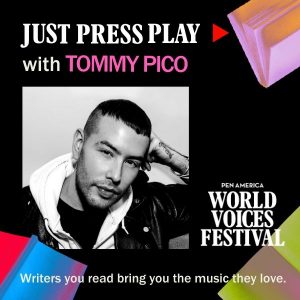 This week, Tommy Pico, the Whiting Award-winning author of IRL and co-host of the hit podcast “Food 4 Thot,” shares his thoughts on every song on his pandemic playlist right now:

1. “Buzzcut Season” | Lorde
“I’m gonna be real: I haven’t had a haircut since November, and I am starting to look mangy. I was going to get a fresh cut right before my spring tour, but with all of my dates canceled and the shop closed, it looks like it might be awhile before I get a good snipping. Looks like it’s buzzcut season, friends!”

3. “Valerie” | Amy Winehouse at BBC Radio 1’s Live Lounge
“Instagram Live has been getting quite the workout. I make most of my income each year from touring, and with everything shut down and all my dates canceled, I decided to get on Instagram Live at 5pm PDT every day to read five or so pages from my second book, Nature Poem. The idea was that the audiobook version of Nature Poem would be out by the time I read the whole book. Unforch, the release was pushed back to April 21. But I still got on every day because it gave me something to look forward to and a chance to connect with people who decided to spend time with my work. It was fun, but now it’s over, and I’m back to that good ol’ feeling of inertia lolsob.”

4. “Sound & Color” | Alabama Shakes
“I thought maybe one way I could wait out. . . whatever this is. . . I would resort to an old childhood habit: video games. I got a Nintendo Switch, a couple games, and kissed ‘productivity’ goodbye. And yes, my teenage fixation did indeed eat up pretty much ALL of my time. I’ve surfaced a week later, dazed, thumbs callused, and nothing—and I mean nothing—done. I had to put the Switch in the closet just so I could carve out time to write this. I think it’s time to introduce the Switch to a swift hammer and be done with it.”

5. “Harvest Moon” | Poolside
“IT’S SO PRETTY OUTSIDE. IT’S EXTREMELY RUDE. I mean, I live mostly in Los Angeles, so every day is like this, and so was yesterday, and tomorrow will be as well. However, the day is getting longer and longer. I wish it was dark at six again so I didn’t feel guilty taking my melatonin when it’s still daylight out, maybe wishing I could just low-key be in a coma for six weeks. But we don’t have to go there—it’s fine.”

6. “Can’t Have” | Steven A. Clark
“My very good friend Jenny Zhang (go buy her books right now!) was also my roommate for a too-short amount of time. But before she left—and months before Rona reared its crappy kisser—she bought toilet paper from Costco. I think she was expecting a pack of FOUR rolls, but she accidentally got FORTY. She was a little embarrassed, and we laughed every time we opened the living room closet, because it was FULL of toilet paper. Guess who’s still laughing.”

7. “Anna Wintour” | Azealia Banks
“True life: I think I’m gonna do that MasterClass thing. I heard the David Mamet one was really good, I’ve heard the Malcolm Gladwell one wasn’t, and I am really curious about what Christina Aguilera thinks about singing. The dramatic music of the trailer is forcing me to believe MasterClass is going to change my life, and when Joyce Carol Oates said distraction is the enemy of writing, I felt that one all the way in my Nintendo Switch. Maybe I’ll come out of the quarantine well-versed in nearly everything, or maybe I’ll come out of it the same POS I went in as. Only time will tell.”

8. “Needed Me” | Rihanna
“While talking on last week’s show, my ‘Food 4 Thot’ co-host Joe Osmundson remarked about how counterintuitive caring for each other is in the time of COVID-19. Usually, when we think of care, we think of showing up for people and holding them. But right now, literally the way to show care for each other is to stay away. That tracks. Honestly, I never liked hugging. I just did it because it was social protocol, and my family finally stopped asking me to come back to the reservation lol.”

9. “Friends” | The Carters
“Seriously, have you tried Houseparty? I did it reluctantly at the behest of my friends Becky and Drea, who is my co-host on ‘Scream, Queen!,’ a podcast about scary movies from people not typically depicted in scary movies. I almost canceled. I almost cancel everything, but that’s LA rubbing off on me. To my complete surprise, it wasn’t just Zoom by another name, but actually a lot of fun. It’s not necessarily about chit-chatting or catching up; rather, it’s a medium of game-playing that legit took my mind off things, and for 40 fleeting minutes, I was in my living room, having wine with my girls and playing charades and shit. Sigh.”

Check out his playlist on Spotify and YouTube today, and order his newest book, Feed, on Indiebound or Amazon.

Tommy “Teebs” Pico is author of the books IRL, Nature Poem, Junk, Feed, and myriad keen Tweets, including “sittin’ on the cock of the gay.” Originally from the Viejas Indian reservation of the Kumeyaay nation, he now splits his time between Los Angeles and Brooklyn. He co-curates the reading series “Poets with Attitude,” co-hosts the podcast “Food 4 Thot” and “Scream, Queen!,” and is a contributing editor at Literary Hub.

Join us next week for a playlist from Polish novelist Szczepan Twardoch, whose first novel translated to English, The King of Warsaw, comes out on April 21.