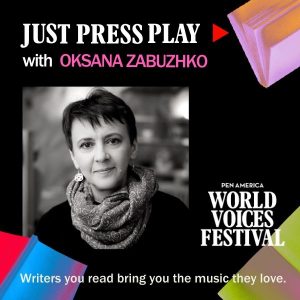 “The playlist below comes from a ‘soundtrack’ that, in my inner hearing, accompanies my collection of stories, Your Ad Could Go Here. The full soundtrack would be quite voluminous. (In several stories, music plays an immediate part of the action; in one, the protagonist is a jazz singer who often quotes from her own repertoire.) As such, I have limited my selection to compositions that I have loyally turned to in quarantine, like close family and old friends.

“The order of the songs corresponds to my book’s table of contents. Joni Mitchell’s 2000 version of ‘Both Sides, Now’ resonates, to me, with the voice of my Daryna from the opening ‘sisters’ triptych’ in ‘Oh Sister, My Sister.’ American audiences may remember Kvitka (or Kasey) Cisyk (1953–1998) as the original voice of the Oscar-winning song ‘You Light Up My Life.’ She was also the victim of the composer’s ‘improper advances,’ which she refused, before he replaced her with Debby Boone. It was a paragon pre-#MeToo story. I introduce a touch of 1970s Ukraine—the ‘soundtrack’ to ‘Girls’ and Darka’s teen years—with a waltz by Ihor Shamo (1925–1982), a composer from the famous ‘Kyiv vanguard school’ (whose symphonic works the pianist Pavlo Hintov now performs online, for aficionados of classical music).

“Tracks three and four belong to the immeasurable world of ‘The Tale of the Guelder Rose Flute,’ which, on its own, could have referenced many hours of recordings. Winter caroling—which, in Ukraine, boasts a long tradition since pagan times—is presented with an excerpt from the legendary ‘Kozlovsky concert,’ where in 1970, Ivan Kozlovsky (1900–1993), one of the great tenors of the 20th century, recorded select Ukrainian Christmas carols with the Moscow Bolshoi Orchestra. A grand success, the master disc was quickly confiscated by the KGB, and collectors secretly hid saved vinyl records until the collapse of the Soviet Union. Our family now listens to the concert every time we require music therapy. Track four, a new composition by contemporary Ukrainian ethno-rock musician Katya Chilly, presents exactly the same dimension of women’s strength that I associate with the protagonist of ‘The Tale of the Guelder Rose Flute.’

“‘The Show Must Go On,’ my absolute favorite by Queen for many years, suggests a musical key to the drama of Milena in ‘I, Milena.’  ‘Go Down, Moses’ by Louis Armstrong (1901–1971) comes from Kyiv Maydan in ‘An Album for Gustav.’ ‘Ohne Dich’ by Rammstein is my marche funèbre for the anonymous glove-master from Vienna, whom the narrator of ‘Your Ad Could Go Here’ is so eager to address in German. ‘Come Talk to Me’ by Peter Gabriel—from his Secret World, one of my favorite albums of the 1990s—is the hidden musical theme of ‘The Tennis Instructor.’ And tracks eight to ten are referenced in ‘No Entry to the Performance Hall after the Third Bell,’ whose protagonist, Olha, sings in clubs. ‘Days Go, Nights Go,’ mentioned in the text, is an old Ukrainian hit traditionally considered masculine, due to the charisma of its author—soul singer Mykola Mozghovy (1947–2010). So, I’ve decided to include here, by way of illustration, the original—which is also from the early 1990s.”

Check out her playlist on Spotify and YouTube today, and order her recently translated book, Your Ad Could Go Here, on Amazon or Indiebound.

Oksana’s Favorite: “The Show Must Go On” from Queen

Oksana Zabuzhko was born in 1960 in Lutsk, Ukraine and received her doctorate from the University of Kiev. When she was a Fulbright Scholar, she wrote Fieldwork in Ukrainian Sex, a novel that caused the biggest literary scandal in Ukraine in decades upon its publication in 1996. Since then, it has been translated into 16 languages and recognized both as the calling card of the new Ukrainian literature and the “Bible of Ukrainian feminism.” Since then, she has published a dozen more books, including three collections of stories, three volumes of essays, a prize-winning study on Lesya Ukrainka, and the prize-winning novel The Museum of Abandoned Secrets, which has been translated into six languages. Her short story collection, Your Ad Could Go Here, was translated by Nina Murray, Halyna Hryn, Askold Melnyczuk, Marco Carynnyk, and Marta Horban.

Join us next week for a playlist from Japanese writer and singer Mieko Kawakami, whose newest book, Breasts and Eggs, translated by Sam Bett and David Boyd, is out now.

A video of House Speaker Nancy Pelosi that has been circulating since Thursday, viewed over 2 million times on Facebook, appears manipulated to make her appear drunk or drugged. https://cnn.it/3i1h1X2

Analysis shows that while major advertisers reduced their spending on Facebook by millions of dollars as part of the Stop Hate for Profit campaign in July, it did not significantly harm the platform’s revenue. https://nyti.ms/30pkxo6