This week, Japanese novelist and poet Mieko Kawakami shares songs from the records that fill her home in Tokyo. Sam Bett and David Boyd have translated to English both her playlist and newest novel, Breasts and Eggs, out now: 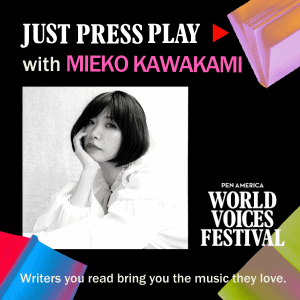 “In these uncertain times, it isn’t easy to make music recommendations or claim that a specific set of songs defines the moment. And a selection based on lyrics or themes would only make sense if we all spoke Japanese. So, instead of curating a playlist of songs for this extraordinary moment, I think it’s better if I give you another kind of list: what I’m actually listening to right now, for no real reason in particular, since that’s probably what I would want someone else to share with me. Here are the songs that have kept me company this March and April; what I’ve been listening to while working around the house, writing, and spending my days with my seven-year-old, who absolutely never sits still. Please think of this as nothing more than a record of the songs one novelist from Japan has listened to on repeat throughout the crazy spring of 2020 at her home in Tokyo. My hope is that these songs will offer you something of the experience they have given me. I’m providing comments, too, for context. Before getting started, I’d like to express my thanks to everybody out there working on the front line, risking their lives on a daily basis, so that people like me can hunker down and work from home. Because of all the words of caution and encouragement from New York, Lombardia, Madrid, and so many other places around the world reaching us via social media and the news, Japan has reframed its attitude toward the current crisis. I offer my deepest respect and gratitude for all the people under threat everywhere.

“In March, I listened to nothing but Beethoven’s Piano Sonatas 30, 31, and 32 played by Sir András Schiff. In them, I find a beautiful, strange space in which everything is completely transparent while somehow completely colorful. Beethoven shakes us to our very core as human beings, and in the stylings of Schiff, his music takes flight—carrying you away to a different kind of place, somewhere between Kant and Nietzsche, neither physical nor metaphysical. His superlative performance, while putting aside all questions of morality, calls to mind the relationship between humanity and the unknown.”

“The Beatles’ Abbey Road (Super Deluxe Edition): I love how we have access to all the demos and alternate takes. It brings me back to when I was a teenager, spending all weekend at the record shop, digging through crates of bootlegs and rare performances.”

“Cyndi Lauper’s ‘Unconditional Love’: There are so many amazing artists out there, but when you don’t want somebody to try and cheer you up, or even offer sympathy, but simply hold you, count on Cyndi.”

“Lana Del Rey’s ‘Love Song’: This lush track stands out from all the strong examples of female empowerment in pop music today for its curious intensity. The song leans so hard into the conventions of heteronormative romance that it comes through the other side and becomes truly radical and incisive.”

“Then there’s ‘Now At Last’ by Feist: when I was working on Breasts and Eggs, published in English translation this April, and in recent days as well, I find myself compelled to put it on every time I see the gorgeous, lonesome evening outside my window.”

“TOM☆CAT’s ‘Tough Boy’: This is the theme song from a post-apocalyptic anime depicting humankind’s survival in the wake of nuclear war. The song was wildly popular in the ’80s and packs the same punch that it always has. When I was a kid, I’d change the lyrics to ‘Tough Girl’ in my head.”

“ZOO’s ‘Choo Choo TRAIN’: All of Japan went crazy for this song in 1991. Back then, I thought it was just about the lamest thing I’d ever heard. I did everything I could to avoid it. Fast-forward nearly 30 years—as our days of social distancing carried on, my son reached his absolute limit and suddenly broke into song and dance, singing the chorus to this track. I was astonished. I’d done everything I could to stay away from this song for years, but somehow it had infiltrated our defenses. He begged me to let him hear the original until I finally relented and had Alexa put it on. The most surprising thing was how, for whatever reason, my body just started moving to the music. It put me in the happiest mood—this song I’d always thought was the lamest thing I’d ever heard! I hear Japanese city pop is hugely popular in the States these days, and have been wondering why, but maybe it’s not so different from how I feel about ‘Choo Choo TRAIN.’ What do you think? Popular songs can be truly wonderful sometimes. In a way, it’s terrifying. They instantly create a sense of unity that you can’t escape, no matter how you try. In no time, they become a part of who you are.”

“This video of a Jon Bon Jovi song is wonderful, I love it. Which reminds me, in Japan, there’s a huge dance festival for the dead each August called Bon Odori—pretty soon we’ll all be dancing along to the tune of ‘Choo Choo TRAIN.’”

Check out her playlist on Spotify and YouTube today, and order her recent translated book, Breast and Eggs, on Bookshop or Amazon.

Born in Osaka prefecture in 1976, Mieko Kawakami began her career as a singer-songwriter before making her literary debut in 2006. Her first novella, My Ego, My Teeth, and the World, published in 2007, was nominated for the Akutagawa Prize, Japan’s most prestigious literary honor, and awarded the Tsubouchi Shoyo Prize for Young Emerging Writers. The following year, Kawakami published Breasts and Eggs as a short novella. It won the Akutagawa Prize and earned praise from the acclaimed writer Yoko Ogawa. Kawakami is also the author of the novels Heaven, The Night Belongs to Lovers, and the newly expanded Breasts and Eggs, her first novel to be published in English. She lives in Japan.

Join us next week for a playlist from James Hannaham, winner of the PEN/Faulkner and Hurston/Wright Legacy Awards for his novel, Delicious Foods.