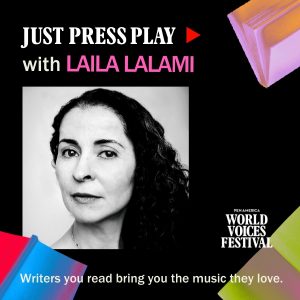 Our first playlist comes from Laila Lalami, the Moroccan writer whose most recent novel, The Other Americans, was a nationwide bestseller and finalist for the National Book Award in Fiction:

“I write this from California, where the governor has mandated that we shelter in place for several weeks in order to slow the spread of COVID-19. The virus strikes indiscriminately, but the risk of infection and the chance of recovery are not shared equally by all. The pandemic has revealed and exacerbated problems in American society: the poor, the uninsured, the incarcerated or detained are being hit harder than others. In these times, music has been a source of comfort and companionship, particularly the songs below, which have been on heavy rotation in my house.”

Check out her playlist on Spotify and YouTube today, and pre-order her newest book, Conditional Citizens, on Amazon or Indiebound.

Laila’s Favorite: “Sleep Now in the Fire” from Rage Against the Machine

Laila Lalami was born in Rabat and educated in Morocco, Great Britain, and the United States. She is the author of four novels, including The Moor’s Account, which won the American Book Award, the Arab American Book Award, and the Hurston/Wright Legacy Award and was a finalist for the Pulitzer Prize for Fiction. Her most recent novel, The Other Americans, was a Los Angeles Times bestseller and a finalist for the National Book Award in Fiction. Her essays and criticism have appeared in The Nation, Harper’s, The Guardian, and The New York Times. Her new book, a work of nonfiction called Conditional Citizens, will be published by Pantheon in 2020.

Join us next week for a playlist from Tommy Pico, the Whiting Award-winning author of Feed and co-host of the hit podcast “Food 4 Thot.”

We support all those who are heading out this weekend to exercise the right to demonstrate and the right to protest. Be on the lookout for fake information and learn how to verify protest info you see online. https://bit.ly/3cxuqmw

Disinformation around these protests is NEXT LEVEL. So, we @PENamerica put a short tip sheet together for protesters & the public. Three ways to verify images, videos, sources, & news sites so you don't get duped by misleading info. There's a lot of it. https://pen.org/pen-americas-guide-for-combating-protest-disinformation/

A major breakthrough in this case. The courts agree: President Trump president can't use his powers to punish journalists he doesn't like; that's why we filed an amicus brief in this case...and why we're suing him. https://pen.org/pen-america-v-trump/