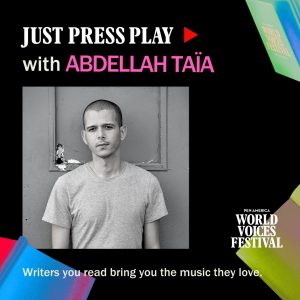 This week, Abdellah Taïa, the first openly gay Arab writer from Morocco, dedicates his playlist to the planet we call home. His latest novel, A Country for Dying, translated into English by Emma Ramadan, comes out in September:

“I can’t live without listening to songs. Great songs. Cheap songs. Too profound songs. Silly songs. Dancing songs. Sad, sad songs. Maria Callas or Nicki Minaj. Abdel Halim Hafez or Rihanna. Samira Said or Bad Bunny. In all my books, there are songs—many songs. And in this period of social distancing, I live more than ever with songs. . . songs to keep the faith alive. . . songs of us, and beyond us. . . I want to dedicate my playlist to EARTH. . . to EARTH. . .  our home. . . Merci. Choukran. Hob. Amour. Love. To you, to you all, and to EARTH.”

Check out his playlist on Spotify and YouTube today, and order A Country for Dying on Bookshop or Amazon.

Abdellah Taïa was born in Rabat, Morocco in 1973. He is the first openly gay Arab writer. Éditions du Seuil has published eight of his novels, written in French and translated into English by Semiotext(e) and Seven Stories Press as well as other languages: L’armée du salut (2006), Une mélancolie arabe (2008), Infidèles (2012), Un pays pour mourir (2015), Celui qui est digne d’être aimé (2017), and La vie lente (2019). His novel Le jour du roi was awarded the prestigious French Prix de Flore in 2010. He directed his first film, Salvation Army, an adaptation from his eponymous novel, in 2013. The film won many international prizes and was selected to the 2013 Venice Film Festival, 2013 TIFF, and New Directors for 2014. His novel A Country for Dying, translated into English by Seven Stories Press, will be released in the United States in September 2020.

Join us next week for our final playlist—a greatest hits album celebrating our authors’ favorite selections from Just Press Play!