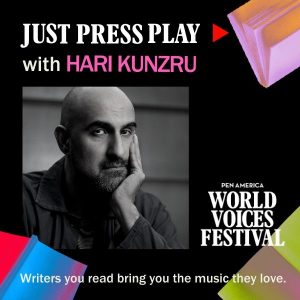 “When I’m writing, I listen to music that creates a space inside which I can think—music that is present, but withdrawn. I’ll pick the Shiv Kumar Sharma’s ‘Raga Charukeshi’ as my favorite, as it’s something that’s been with me for at least thirty years, and it’s astoundingly beautiful.”

Check out his playlist on Spotify and YouTube today, and pre-order his newest novel, Red Pill, on Bookshop or Amazon.

Hari Kunzru is the author of five novels, most recently White Tears, a finalist for the PEN/Jean Stein Book Award. His next book, Red Pill, is scheduled for September 2020. His work has been translated into over twenty languages. His writing has appeared in publications including The New York Times, The Guardian, The New York Review of Books, The New Yorker, Granta, October, and Frieze. He is an Honorary Fellow of Wadham College, University of Oxford and a Fellow of the Royal Society of Literature, and he has been a Cullman Fellow at the New York Public Library, a Guggenheim Fellow, and a Fellow of the American Academy in Berlin. He teaches in the Creative Writing Program at New York University.

Join us next week for a playlist from Maurice Carlos Ruffin, author of We Cast a Shadow, a finalist for the 2020 PEN/Open Book Award.