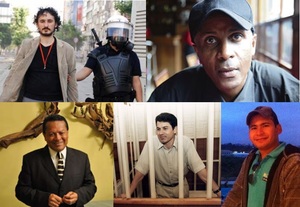 On May 3 PEN International marks World Press Freedom Day, affirming the importance of freedom of expression and press freedom—a fundamental human right enshrined in Article 19 of the Universal Declaration of Human Rights.

“PEN members worldwide are personally engaged in the struggle for freedom of the press,” said Marian Botsford Fraser, Chair of PEN International’s Writers in Prison Committee.

“We are no strangers to the challenges and dangers journalists and media workers face in the course of their work, which is essential in providing checks and balances to all governments.”

The day is also an opportunity for the international community to renew their commitment to press freedom.

The date marks the anniversary of the Declaration of Windhoek, a statement of principles drawn up by African journalists in 1991 calling for a free, independent, and pluralistic media on that continent and throughout the world.

PEN monitors attacks on hundreds of journalists worldwide each year, highlighting the dangers they face. The organization campaigns for dozens of emblematic cases of journalists persecuted by governments in all regions of the world. PEN also campaigns on behalf of transitional media and Internet users, recognizing that writers—including online journalists, bloggers, and social media producers—in the digital world, where news is increasingly produced and consumed, are no less subject to forms of persecution such as arbitrary arrest, torture, unfair trials, physical attacks (including in the most extreme cases killing), and threats than their traditional media colleagues.

Online writers additionally face new forms of attack such as cyber-attacks, data breaches, invasion of privacy, and undue surveillance. Through its Declaration on Digital Freedom, PEN has been campaigning to protect journalists online and highlight the ways in which assaults, such as online censorship and illegal surveillance, limit the right to freedom of expression—which includes the right to receive and impart information—and undermine press freedom.

Journalists and social media users are increasingly facing pressure and often prosecution from the government’s crackdown on free expression. These pressures have only increased since the introduction of a new Internet law, giving Turkey’s telecommunications authority almost unlimited power in tightening its control over the Internet.

PEN is also gravely concerned by a controversial new law ratified by President Gül on April 26, 2014, that gives Turkey’s national intelligence agency MİT extraordinary new powers. Under the new law, journalists and editors who publish leaked intelligence material are liable for jail terms of up to nine years. The law also gives the intelligence agency unrestricted access to private data without a court order. The new law greatly undermines freedom of expression, press freedom, the right to privacy, and the public’s right to access information, while violating Turkey’s obligations under international human rights law.

Gökhan Biçici is a reporter and editor for İMC TV who was subjected to police violence during the 2013 Gezi Park protests. Arrested on June 16, 2013, while documenting the excessive force used by police against protesters in Istanbul, Biçici was beaten severely by police before being dragged through the streets. Observers in apartments overlooking his arrest captured footage of the attack, which went viral on social media within a matter of hours. Read more and take action here.

Journalists who cover organized crime, government corruption, and other sensitive issues are increasingly facing threats and lethal attacks in Honduras, with almost complete impunity for perpetrators. Since June 2009 at least 32 Honduran journalists (most working for the broadcast media) have been killed and many more continue to work in a climate of fear and self-censorship. Only two cases have seen a successful prosecution—an impunity rate of over 90%.

Ahead of World Press Freedom Day (May 3), PEN welcomes the recent convictions for the murders of journalists Aníbal Barrow and Alfredo Villatoro Rivera. However, PEN notes that only one of at least six suspects in the Barrow case has been convicted; the sentencing of Villatoro’s killers has been delayed; and those who ordered both murders have yet to be found.  Additionally, five months on, there has been no progress in the investigation into the December 2013 murder of radio station owner and reporter Carlos Argeñal Medina, while a family member seeking justice for his murder has been subjected to intimidation. Of 38 journalists killed in Honduras since 2003, only four cases have seen any convictions, an impunity rate of 90 per cent. Attacks on journalists continue unabated, as evidenced by the murder of another media worker in April—despite the fact that the Inter-American Commission on Human Rights had ordered his protection—and the judicial harassment of journalist Julio Ernesto Alvarado, who was convicted of criminal defamation. Read more and take action here.

In recent years several laws curtailing free speech and dissent have been passed in Russia. These laws—the so-called “anti-gay propaganda” law, the “blasphemy” law, and a law reintroducing criminal defamation—specifically restrict the right to free expression, and pose a particular threat to journalists and bloggers. This week, Russia’s Upper House of Parliament approved a bill that applies new restrictions to the Internet and blogging. Once signed into law by President Putin, the laws are expected to take effect in August, when bloggers with more than 3,000 page views a day will face regulation and legal liability. Human rights groups have criticized the bill as a means of suppressing critical voices on the Internet.

PEN is deeply concerned by the news that the Russian Parliament has passed a bill that threatens to stifle freedom of expression online. If the bill is ratified by President Vladimir Putin, popular bloggers will be required to comply with the same onerous standards imposed on traditional media outlets in Russia. PEN calls on President Putin to veto the new law and uphold freedom of expression online in accordance with Russia’s obligations under international treaties. Read more and take action here.

Ethiopia has a long history of government control over media. Following the controversial elections of 2005, a crackdown on press freedom—with repressive measures introduced aimed at restricting freedom of expression and associatio

n—has resulted in a stifling of critical voices. Although recent years have seen a rapid increase in amount of internet access and use in Ethiopia, there has been a corresponding development of the Ethiopian state’s digital surveillance technology, the sophistication of which could pose increasing threats to voices of dissent in the country.

The state has increasingly utilized its draconian Anti-Terrorism Proclamation No. 652/2009 to arbitrarily arrest, prosecute, and imprison independent journalists and opposition activists. Actions classified as “terrorist” would often not even be considered crimes outside of Ethiopia. The application of the law has led to many journalists opting for self-censorship instead and a stifling of independent publications. Nine bloggers and freelance journalists have been arrested in recent days, and at least five print journalists, including Eskinder Nega and Reeyot Alemu, are currently held in the country for alleged terrorism.

The arrest of nine bloggers and journalists in Ethiopia just days before World Press Freedom Day on May 3 once again highlights PENl’s concerns for freedom of expression in the country. PEN recalls with dismay that last year Ethiopia’s Supreme Court marked World Press Freedom Day by upholding journalist Eskinder Nega’s 18-year prison sentence on highly dubious terrorism related charges; he and at least four other journalists remain in prison in Ethiopia on similar charges. Read more and take action here.