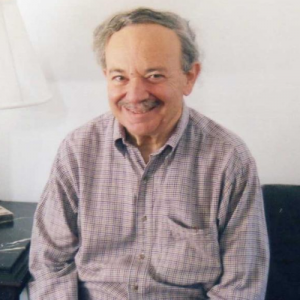 Selected Remembrances:
“He was above all smart and intellectual. You could talk to him about everything—he knew literature, he knew music, but he loved to talk about his daughters. He was so proud of his daughters.”
—Joye Brown, Columnist, Newsday [Newsday]

“So many facets. So many views. So many ways of knowing. He hated peas. He wore black dress socks with shorts. He was terrible at Pictionary. He preferred to drive a standard transmission. He liked fresh New York bagels with lox. He read Dick Francis mystery novels. He walked at Caumsett. He jumped in the surf off Long Island. His facial hair was too coarse for electric razors. He had size nine feet. He completed the New York Times crossword puzzle every day. He always liked to get cake and presents on his birthday, but didn’t much care about Father’s Day, which he called a Hallmark Holiday.

“We dwell in one another.

“He was my father. I‘d known him for more than forty-seven years. But others knew him, too. In hearing some of those memories, I’ve not only gotten to know him better, but myself, as well.”
—Nancy Fresco, daughter of Robert Fresco [Writing with Latitude (personal blog)]

“Bob was an early adopter of data-driven reporting techniques—he was quick to grasp how complex systems worked and had encyclopedic knowledge of the Island’s counties, towns, cities and villages. So it was natural for editors to draft him to work on projects. He was a strong team player.”
—Richard Galant, managing editor at CNN Opinions and former Newsday editor [Newsday]

“He loved his work and attacked every reporting assignment with an unabashed earnestness. He participated in many of the paper’s groundbreaking local reporting projects in the 1980s and 1990s and was a member of the team that won the Pulitzer Prize in 1984 for the paper’s coverage of the Baby Jane Doe controversy.”
—Howard Schneider, executive director of the Center for News Literacy at Stony Brook University and former editor-in-chief at Newsday [Newsday]

Selected Work (via newspapers.com):
“Doomed at impact, above it” (co-authored with Richard J. Dalton Jr.), Newsday (appeared in the Springfield News-Leader), February 5, 2002.

“Nearly everyone who died in the World Trade Center towers was located at or above the floors where the airplanes hit, a Newsday analysis reveals.”

“Wendy Katkin was crazy about mathematics when she arrived at Queens College, but before her freshman year was over she couldn’t stand going to class. . .

“In the end, she became an English major.

“Nearly 35 years have passed since Katkin, who now lives on Long Island, dropped math. But the problem of women dropouts in the ‘hard sciences’ lingers on. Nearly a quarter century after the women’s rights movement gathered steam in the 1960s, women still only get about 15 percent of college degrees in engineering and physics, federal counts show.”

“Born in rural Kentucky in 1905, the illegitimate son of a deaf mute mother and a farmer, he came to Cincinnati at the age of three, shuntered from one foster home to another. . .

“As a black, he was a second class citizen in the eyes of many whites. Having a light skin, he was taunted by his black contemporaries.

“But any social analyst who predicted that his background was a sure ticket to disaster would have been dead wrong.

“For, late last year, Theodore M. Berry was sworn in as mayor of Cincinnati — the first black to reach the city’s highest office.”

“A merger of Cincinnati schools with neighboring school districts is seriously being considered as a way to improve racial integration in the city’s schools.

“This was revealed Tuesday by Robert L. Westheimer, who heads a 39-member citizen task force charged by the Cincinnati Board of Education with finding ways to end racial isolation in the schools.”

“Cincinnati’s black population, which 10 years ago was largely concentrated in the West End and to a lesser extent in Avondale and Walnut Hills, has dispersed throughout many other neighborhoods in the past decade.”

Even before the election results had come in––results that were likely rigged––Ugandan singer-turned-opposition-leader @HEBobiwine's house was surrounded by military. ARC & @PENamerica condemn these intimidation tactics: https://pen.org/press-release/pen-america-condemns-siege-around-ugandan-opposition-leaders-home/