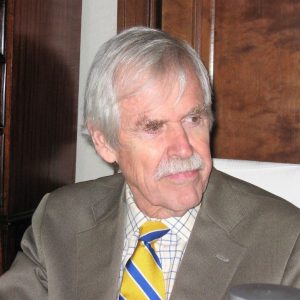 Selected Remembrances:
“The book of journalist Donald Shannon’s life opened with one headline-generating pandemic and ended with another. He was born in 1923, just a few years after the Spanish flu, then died 97 years later, due to complications of COVID-19. In between, he covered stories large and small, traveled the world, married and raised a family.”
—Jennifer Berry Hawes, Reporter, The Post and Courier [The Post and Courier]

“A lion of Georgetown has left us. Don was a wonderful, warm, energetic person. . . Don was very vocal about his opinions of politicians who he felt let D.C. down. At one memorable CAG meeting following another reelection of Marion Barry, the ‘Mayor for Life’ had been invited to speak about his plans. Don began a question about something Barry said by addressing him as ‘Mayor Sleazebag’ to the consternation but also delight of those present. However, on most issues Don was more temperate, a voice of reason whose views commanded respect.”
—Richard deC. Hinds, General Counsel, Citizens Association of Georgetown [The Georgetowner]

“He and [his wife] Sally both loved Washington, where they had many friends and attended countless official and social events. They lived in a federal period townhouse in Georgetown. When he bought it in 1951, the city had condemned it as uninhabitable. The Shannons were champions of Georgetown.”
—Family of Donald H. Shannon [The Georgetowner]

“In 1954, when Shannon was assigned to cover important Supreme Court decisions, he compensated for his lack of legal expertise by telephoning an acquaintance from California, then-Chief Justice Earl Warren. In Shannon’s telling, Warren agreed to explain the court’s decisions to the young reporter each week, off the record.

“UNITED NATIONS—There are many reasons why the United Nations General Assembly doesn’t work, and another one was added just as the Assembly faltered to a finish this week.”

“TOKYO—The great hijack in which Japan so spectacularly joined the rest of the world, with all its air piracies, showed, at the asme time, how apart from the world Japan remains.”

“LEOPOLDVILLE—By coincidence, and certainly nothing more, the series of African military coups in the early part of this year came as Gov. G. Mennen Williams was ending his six-year service as U.S. Assistant Secretary of State for American Affairs.”

“PARIS—The ‘I told you so’ satisfaction that a lot of Frenchmen from Gen. de Gaulle down were getting out of the crumbling U.S. position in South Vietnam is giving way to the realization that defeat will be a blow to all the Western world and not merely the United States.”