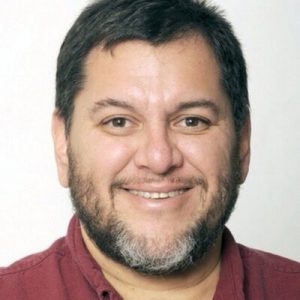 Selected Remembrances:
“He never did not go investigate something, even when we were going to dinner. He was a superhero nerd and the best Poppa ever.”
—Daughters of David Castellon [Visalia Times-Delta]

“He was one of the most dogged reporters I ever worked with. You don’t find many reporters like him anymore.”
—Gabriel Dillard, Managing Editor, The Business Journal [Visalia Times-Delta]

“David was fearless. He always knew what to ask and helped younger writers hone their reporter skills. He didn’t back down. Even when those on the other end of the line wished he would. . . David worked tirelessly to hold public officials accountable. So many people around Visalia and Tulare have a David Castellon story. He will be remembered for his in-depth looks at gangs, how elected officials spent taxpayer money, and his tough questions.”
—Eric Woomer, News Editor, Visalia Times-Delta [Visalia Times-Delta]

“If you’ve raised a school-aged child over the past decade, chances are you’ve noticed a change to one of the most iconic childhood snacks — raisins.

“Yes, they are still dried grapes, and they still come in little boxes.

“What has changed is that at some schools, raisins are now available in different flavors — lemon, peach and even sour fruit, to name a few.”

“Even though hemp was made a legal crop by federal lawmakers back in December 2018, starts of commercial hemp farms in California had to wait for the state to determine its licensing rules.

“On April 30, the California Department of Food and Agriculture (CDFA) announced those regulations were in place, allowing county agricultural commissioner offices to began taking hemp farm license applications for the state.

“But here in the Central Valley, the set rules haven’t exactly generated stampedes of farmers and investors looking to start hemp farms.”

“No shuttles from Visalia for this year’s World Ag Expo” Tallahassee Democrat, February 8, 2016.

“The 2016 World Ag Expo starts tomorrow, but before you head out to the three-day event in Tulare, here are some things you should know about the world’s largest agricultural trade show.”

“The first of a series of storms that could continue into next week dropped nearly a quarter of an inch of rain on Visalia Tuesday and about 10 feet of snow in the upper elevations of the local Sierra Nevada Mountains.

“In the Valley, the storm wasn’t as potent as expected, as some forecasts on Monday had called for about a half inch of rain in parts of Tulare County.”

“A Visalia man has been sentenced to 31 years in prison for his role in a fatal gang-related shooting in 2012, while a Lindsay man has been convicted for a 2011 murder in his city.”