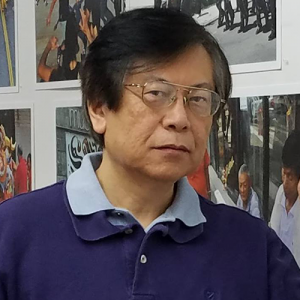 Selected Remembrances:
“It is with great sadness that we announce the passing of Corky (Young Kwok) Lee. Corky, as he was known to the Asian American community, was everywhere. He always had a camera around his neck, documenting a community event, capturing a social injustice for the record and even correcting the social injustice of an historical event that took place well over a century ago. He did what he loved and we loved him for it.

“Corky had a very unique lens. His passion was to rediscover, document and champion through his images the plight of all Americans but most especially that of Asian and Pacific Islanders. He has left us with what is likely to be the single largest repository of the photographic history of Asian Americans of the past half century.”
—Family of Corky Lee [Facebook]

“He’s like Johnny Appleseed. He would go around and spread ideas so the seed would grow. I’m not saying that all he did was take pictures. I’m saying that he saw a problem and then had solutions.”
—Viktor Huey, friend of Corky Lee [NBC News]

“His most important work came during a time when Asian-Americans felt invisible, and the sight of someone from their world in a major newspaper seemed revolutionary enough. He was drawn to moments of quiet dignity: the storekeeper or restaurateur, proud of their small domain; the picketer, glaring in the direction of their bosses; young couples gazing off into the distance, wondering what the future might hold. His photographs often focussed on juxtapositions, ways of bringing the Asian-American into focus as a part of American society.”
—Hua Hsu, Staff Writer, The New Yorker [The New Yorker]

“He was able to capture a basic humanity. I think his favorite medium was black-and-white photography. I remember rolling film with him back in the day, and he took pictures of common people who, to him, were the most important people. He was never a staff photographer in the traditional sense of being attached to a media outlet. He was largely an independent photographer, and he went where he thought it was important to be.”
—John Lee, brother of Corky Lee [NBC News]

“For Lee, showing up to any event went hand in hand with documenting it. His pictures are formally and narratively striking, tracing a whole tapestry of relations woven of smaller details: An image of the Jing Fong restaurant workers’ strike in 1995 depicts a crowd of protesters in the background as a policeman glares at a worker burdened by boxes in the fore. The interlocked arms of young men at a march mirror the swooping billows of a banner with Chinese characters. The bold lines of a cityscape clash with angled rectangles of protest placards. . . We see events unfolding in all of their unpredictable glory through the determined forward movement of an individual or a group in action. Lee’s subjects were doers.”
—Ming Lin and Alexandra Tatarsky, Founders, Canal Street Research Association [Vulture]

“Corky Lee is synonymous with Asian American history in New York and beyond. Indeed, without his efforts, much of our history may have gone unnoticed and unchronicled.

“Corky dutifully and loyally photographed thousands of events and milestones in the Asian American community for a half-century.

“At a celebration of 40 years of his work many years ago, I was privileged to have the opportunity to grab his camera and, in a role-reversal, snap away at him. My condolences are with his loved ones, he is truly missed.”
—John C. Liu, New York State Senator [Twitter]

“Corky is a legendary photographer and well-known for capturing the APIA experience. But the reason his photographs resonated so much with those who saw them was the way they also reflected his ‘heart’—his love, generosity, and concern for others, especially those in the APIA community. He, in fact, stayed true to his life’s mission to the very end, photographing recent hate crimes against APIAs over the past year then, once he was hospitalized, the abundance of flowers he received from friends and community members who wanted to honor our unofficial APIA photographer laureate. Rest in peace, Corky Lee.”
—Connie So, President, OCA Greater Seattle [Northwest Asian Weekly]

“He wasn’t famous per se, right? It’s not like he had a household name. He had no huge platform other than his camera, his being and his efforts. But through that, he has touched millions of lives. . . I think everyone has a unique, funny and amazing story about Corky. Everybody felt special to Corky. He united people and made them proud of who they were. It’s very rare to meet someone who seems to have all the time in the world for everyone. Corky was there for everyone. I think that’s why it hurts the community so hard because he has always been there.”
—Jennifer Takaki, Director and Producer, Photographic Justice: The Corky Lee Story [NBC News]

“I don’t know who we’d be without Corky Lee’s photos. When I was gathering art and archives of Asian American organizing, his photos were evidence of the struggle, a vital report from the movement.

“Community is made of people who show up, and he showed up to everything: rallies, exhibitions, dances, policy meetings, and every banquet in Chinatown. He was ornery and opinionated and hilarious, an uncle who always had a Chinese American history lesson to teach me.”
—Ryan Lee Wong, art curator and writer [Instagram]

“I think our happiest memories were photographing together. I’m a photographer as well, and so he was my mentor from the very beginning. He took me under his wings, and we went out to a lot of events. After each event, no matter how far I ventured off, Corky would find me. We would find each other. . .

“I think that for Corky Lee, he probably did not think about his age or vulnerability. I think he was thinking about the story and doing justice to it because there were a lot of people that may not have gone out there, and he wanted to make sure that he had gotten the photos to show people.”
—Karen Zhou, photographer and partner of Corky Lee [NBC News]