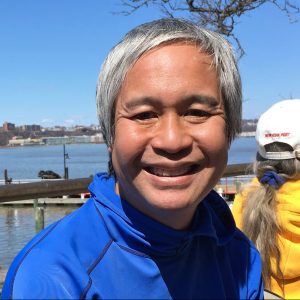 Selected Remembrances:
“He ran marathons on every continent, including Antarctica — 83 of them in all, many followed by a visit to an obscure craft brewery. Last year, he watched 365 movies — most of them in theaters. And Anick Jesdanun made sure — always — that when millions of people read his coverage of the internet and its ripples, they got all the facts and the context they needed.”
—Ted Anthony, Journalist and Director of Digital Innovation, The Associated Press [The Associated Press]

“More than 100 new and revised entries related to technology have been added to AP Stylebook Online.

“Much of this work was done by AP deputy technology editor Anick Jesdanun, along with technology editor David Hamilton. Jesdanun wrapped up this effort shortly before he became ill with COVID-19. He died on April 2. We dedicate the 55th edition of the AP Stylebook to Jesdanun.”
—AP Stylebook [Twitter]

“What made Nick a great journalist was his ability to see what was coming around the bend and also his meticulousness as an editor. He was completely unflappable. On 9/11 we were in New York [at the AP offices] at 50 Rockefeller Plaza, and there were people who were afraid and wanted to go home and expressed that. Not Nick. Nick looked at me [and said]: ‘OK, what do you need me to do?’”
—Frank Bajak, Technology Editor, The Associated Press [MarketWatch]

“Anick Jesdanun’s byline was ubiquitous on the @AP wire — he brilliantly and tirelessly covered the emergence and evolution of the internet in the late ‘90s and 2000s.

“Nick was always, always there when you needed him. I think that is what we will all miss most about Nick. Without fail, he always showed up for the ones he loved.”
—Serene Compare, cousin of Anick Jesdanun [MarketWatch]

“He was our role model. [We were told]: ‘Grow up to be like Nick. Take after Nick in his thoughtfulness and his brilliance.’”
—Rita Harms, cousin of Anick Jesdanun [MarketWatch]

“I wanted to honor Nick by sharing his COVID19 story as a way to spread the word and help save lives. Nick was the picture of health. He had no underlying health problems and would not be considered high risk by any means. This past November he ran his 83rd full marathon. . . Nick had the strongest heart of any of us in the family, yet this coronavirus was able to take him away from us.”
—Prinda Mulpramook, cousin of Anick Jesdanun [Facebook]

“He was a lovely person. Even though he was quiet, he was the most social person I know. He had a lot of friends. Even though he lived alone, he was never lonely.”
—Hiromi Nobata, friend of Anick Jesdanun [Runner’s World]

“He loved Chinese pork buns and always bought some for the rest of us in the office. One of our last texts was about pork buns, and I thought he’d turned a corner because he said he wanted one.”
—Barbara Ortutay, Technology Writer, The Associated Press [The Associated Press]

“When journalist Anick Jesdanun ran the Antarctica marathon in 2007, he made one of his slowest times yet. In a blog post, he blamed a penguin that crossed his path—and he couldn’t resist stopping to take a photograph of it. Every one of the 83 marathons Jesdanun ran—spanning every continent—was an adventure.”
—Clarissa Sebag-Montefiore, Writer, MarketWatch [MarketWatch]

“Apple is releasing a new iPhone that will be vastly cheaper than the models it rolled out last fall when the economy was booming and the pandemic had yet to force people to rethink their spending.”

“How to binge on Oscar movies in cinemas for cheap” The Associated Press, January 31, 2020.

“At $15 a pop in major cities — and sometimes more — going to the cinema can easily break the bank. That’s where a movie subscription comes in.”

“Beware of the smart device: Ways to stay private and safe” The Associated Press, December 31, 2019.

“Did someone invite a spy into your home over the holidays? Maybe so, if a friend or family member gave you a voice-controlled speaker or some other smart device.”

“Film fan finds the real joy of movies is still in theaters” The Associated Press, February 22, 2019.

“Sure, it’s easy to Netflix and chill these days. Or Prime and recline. Or Hulu and … well, whatever. But if you really want to savor a film, there’s still no substitute for a movie theater.”

“Rant all you want in a public park. A police officer generally won’t eject you for your remarks alone, however unpopular or provocative. Say it on the Internet, and you’ll find that free speech and other constitutional rights are anything but guaranteed.”