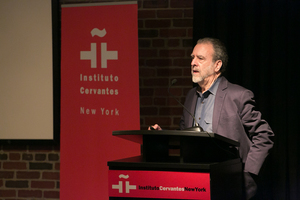 This tribute was written by Jonathan Cohen. He is the translator of Ernesto Cardenal’s Pluriverse et al. He edited Muna Lee’s A Pan-American Life, and is the editor of William Carlos Williams’s By Word of Mouth: Poems from the Spanish.

Meeting Edith Grossman for the first time, I thought she was a volcanic beauty. Her burning eyes made it clear to me I was in the presence of not just a very hot number but a very intense intellect. Plus, how she used words when she spoke. Plus, her anti-poetic sense of humor. This was in 1974—back in the day, as she would say—at one of the wonderful receptions held at the old and elegant Center for Inter-American Relations (now called the Americas Society). The Center was a great meeting place for writers and translators during the “boom” years. I was at the time a young translator of Latin American poetry, eager to meet fellow translators.

Edie and I clicked right away, and so a friendship of many years began. We first talked about poetry and translation and Spanish red wine. We still talk about these things—and a whole lot more. How lucky I am to have such a brilliant friend. She challenges me; she keeps me mentally alert. She encourages me to keep going. And beyond me, how lucky the English-speaking world is to have her brilliant translations that have taken us to so many incredible places and on such great human adventures. Edith Grossman has earned this tribute on the occasion of her 80th birthday and appropriately as part of PEN’s World Voices Festival. There’s no question about it.

With my gratitude for her being just who she is, I cheer Edie now—our translator supreme, whose eyes continue to burn, and whose work continues, enriching us all, supremely.