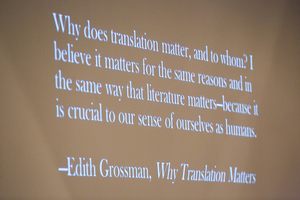 This tribute was written by John Donatich. He is the director of Yale University Press, and the author of The Variations: A Novel.

When Edie published her book Why Translation Matters with Yale, I remember talking with her about why, of all the interpretive arts, translation had to defend itself against the insensitive and damaging charges of whether it was even possible to do so. Or not traitorous. No one asks a pianist or a dancer or an actor such a question. We depend on literary translators to illuminate a work and bring it to us. We depend on the rigorous efforts that were made to prepare the interpretation and the delight in performing them. We appreciate the love that was expressed throughout.

And so it is with Edie’s work. Beside the essay on translation, Yale has published her translation of Carlos Rojas’ The Ingenious Gentleman and Poet Federico Garcia Lorca Ascends to Hell: a daring novel that explores the concept of hell with considered elegance even as it is licked by the flames of riot and chaos. Edie mastered the temperature of that book. This fall, we will publish her version of Cervantes’ Exemplary Novels. The fact that this classic text has not seen a complete translation in over a century makes me think that others were intimidated, knowing that Edie had to get around to it someday. With Cervantes, Edie manages a trick of time: we recognize an antique formality that winks at itself without appearing anachronistic. And it’s funny.

I experienced no ambivalence enjoying these books in English, even while appreciating that the experience in Spanish had to be different. I know in reading an Edith Grossman translation that the text had been cared for with an almost maternal ferocity and an adventurous intelligence: the kind that knows how to find meaning in fidelity and create mischief in managing it.

There is a medieval theological sense of the word, “translation” that investigates the rendering of a soul unto heaven without its dying. That, I think, is the masterwork of literary translators as well.

Miles Smith, in the prefatory essay to the 1611 Bible (“The Translators to the Reader”) writes:

“Translation it is that openeth the window, to let in the light; that breaketh the shell, that we may eat the kernel; that putteth aside the curtaine, that we may looke into the most Holy Place; that remooueth the couer of the well, that wee may come by the water, . . . .” It is this sense of being given a privilege, a vantage, sudden sight that the best work delivers. It is probably inevitable that the literal would doubt the gift of translation: it is work that has to be trusted without clinical proof. Theologians and translators are, ultimately, masters of parallel dilemmas.

There is a famous rule known as the Polanyi Paradox which states “we know more than we can tell.” I believe that, in the hands of poets and their translators, we tell more than we can know.

Thank you, Edie, for your friendship and for your work.