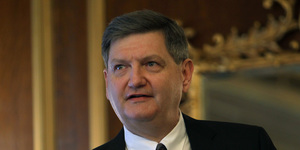 On December 10 (Human Rights Day), PEN closed out the year with one of its signature events: a holiday card-writing session where PEN members and supporters gathered to send non-denominational season’s greetings cards to writers in prison around the world. This year’s event included something new: attendees were invited to sign a letter to U.S. Attorney General Eric Holder, urging him to stop the Justice Department’s efforts to force New York Times national security reporter James Risen to identify his confidential source(s). Risen, a Pulitzer Prize-winning journalist, is one of only six U.S. cases on PEN International’s case list of over 900 imperiled writers. For the past seven years, Risen has lived with the threat of being forced to choose between violating the confidentiality of a source relationship or going to jail, as both the Bush and Obama administrations have sought to subpoena his testimony in the prosecution of Jeffrey Sterling. As PEN’s letter stated:

It is deeply unsettling that on a night when our attention is focused on writers imprisoned for expressing themselves by the world’s most repressive governments, we must also worry about keeping a U.S. writer out of an American jail… We expect and demand better from the United States. Continuing the effort to compel Mr. Risen to testify would cement the Obama Administration’s legacy as one of the most hostile to press freedom in U.S. history, offering comfort to authoritarian regimes that their attacks on press freedom are likewise justified.

It’s too early to call this a victory for press freedom. The Justice Department’s filing indicates that it is trying to find a way to move forward that will be amenable to Risen, but we don’t yet know what questions Risen and his lawyer, Joel Kurtzberg, will agree he can answer without violating his pledge of confidentiality. The various parties to the case will meet again on January 5 to discuss the questions that the prosecution and defense teams wish to ask Risen on the stand. In a few days, we’ll know whether Risen can rest assured that he will not have to give up his liberty to protect his source(s), or whether his fight to protect the ability of all reporters to maintain sources’ confidentiality will continue.