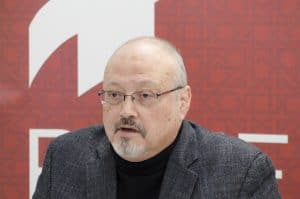 Jamal Khashoggi, the prominent Saudi journalist, has been missing since entering the Saudi Arabian consulate in Istanbul, Turkey on October 2. There is no evidence that he left the building—despite requests by the Turkish authorities that Saudi officials produce proof of his departure—and he is feared to have been murdered inside the consulate on the orders of the Saudi crown prince. Saudi Arabia has denied involvement.

Khashoggi, a veteran journalist with a history of generally friendly relations with the royal family (though he had twice been forced to leave as editor of the reformist newspaper Al Watan due to his criticism of hardline Salafi Islam), had become increasingly critical of the Saudi regime in recent years. In the summer of 2017, he made the difficult choice to go into exile and relocate to the United States. From there, his voice reached a wider circulation through a regular column for The Washington Post, as well as via social media and other media appearances. Though based in Virginia, Khashoggi was in Istanbul with his Turkish fiancé and had gone to the consulate to procure a document required for his upcoming marriage to her.

PEN America immediately released a statement on October 6 condemning the reported assassination of Khashoggi. Our response was quoted prominently in the Associated Press and Washington Post, among other outlets.

PEN America staff have also spoken out expressing our concern to the Daily Beast, Politico, Al Jazeera, and others, as well as taking part in and speaking at a vigil in front of the Washington Post office in Washington, D.C.:

Host: “Reports regarding U.S. agency awareness of Khashoggi’s targeting have raised the intensity of questions here about an affair involving a well-known journalist who writes for one of the biggest American newspapers and who resided in the United States.”

Thomas Melia: “If the reports are accurate, then the U.S. agencies had an obligation to inform Jamal Khashoggi of the danger and should have advised him against going to that consulate or to Turkey, if Saudi Arabia, which is supposedly our ally, was developing a plan to kidnap an individual living in America.”

We have also engaged on the case with both houses of Congress, and are pleased that, in a major positive step, the Senate Foreign Relations Committee used the Global Magnitsky Act on October 10 to formally require the administration to make a determination within 120 days of whether an extrajudicial killing or other form of gross human rights violation has been committed against Khashoggi; if so, this would automatically trigger sanctions. We will be continuing to follow the case closely and to advocate for the Saudi regime to provide clarity about Khashoggi’s whereabouts at the earliest possible time.