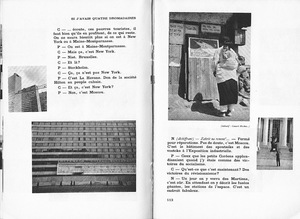 Sergey Levchin is the recipient of a 2014 PEN/Heim Translation Fund Grant for his translation of Commentaires by Chris Marker.

Chris Marker is a famous unknown, a cinephile shibboleth, his banal pseudonym perhaps first among the names that divide the pearl diver from a mere wader; a relentlessly self-effacing self-mythologizer, whose meandering, globetrotting, paradoxically personal philosophical essay-film about Japan-time-memory Sans Soleil (1983) is still the inevitable offering of any Intro to Film course, inevitably reserved for the make-up day. He is also said to have made a short film entirely out of still photographs that later inspired Terry Gilliam’s Twelve Monkeys. Little more is generally known of the eccentric Parisian, whose remarkably extensive body of work includes some sixty films, hundreds of essays and articles, and dozens of avatars.

In the past decade or longer, longer certainly than I would like to admit, I have delved on and off into Marker’s filmography—tantalizing in sheer volume as much as rarity. In that time I learned to make films, to speak French, to translate … and the master himself had died. That was when we finally learned his name and birth date (91 years prior, to the day), both engraved on the casket.

Of course, by then “my” Marker was no longer a shimmering cipher: from his many works I had been able to tease out bits of biography, distinct stages of his long career, affinities and affiliations, artistic roots, circumstances, trajectories—all the things that strip away the veneer of mystery and reveal (in the best cases) a far deeper mystery.

The “essay film” is Marker’s invention and natural element, its best specimens brilliant orchestrations of image and text and sound, of intuition (the snapped photo—and Marker’s images are nearly always still, even when they are moving) and reflection (the commentary).

The two Commentaires volumes, published in France in 1961 and ’67, respectively, are a summing up of the essay-film phase of Marker’s career, which would hibernate for the next 15 years to re-emerge as the masterpiece Sans Soleil. These are the founding texts of the genre, print variants of nine early essay-cum-travelogues, two of which were never filmed. The title is deceptive—these are not merely “commentaries” or voice-over scripts torn from the fabric of the films, not the films’ pale shadows. Generously supplied with images, dynamically and idiosyncratically laid out by Marker himself, they become photo-essays, works of art—both visual and literary—in their own right.

And while the photos mercifully speak for themselves in any language, it is both remarkable pleasure and cringing toil to attempt to recreate Marker’s playful idiom and verbal pyrotechnics in English. I am deeply grateful to PEN for supposing I may be up to the task.