Inside the Inside of the Green Monster 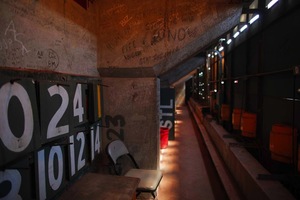 Inside the Inside of the Green Monster

Celeste had never been to Fenway Park. Her father had taken her brother once or twice, but never her. Henry didn’t know this when he invited her. She hadn’t told Henry much about herself, because of how they had met. A week earlier, she had walked up to her apartment, the second floor of a house in Somerville, and a man was sitting on her porch sipping beer out of her favorite stolen pint glass, his free hand mopping his forehead. When she opened the door—she didn’t know what to say—he had bent over the side of the porch and waved as if he knew her, his fat brown eyebrows perched upside-down on his face like fruit bats.

She almost turned and ran. Instead, she tugged her earlobe, twice, for luck, a gesture from her luckless mother, and tried to become someone else. Wasn’t that what he was doing there? And he was somehow so charming, or she so lonely, he soon had her talking. She didn’t know how he’d done that. She still didn’t know how he had gotten inside. She hadn’t locked the screen to the porch—maybe he had climbed the support beams and sat down on the porch waiting for something to happen. That seemed like him. She had known a version of him from the moment he took a pen down from over his ear, bit the end, and said sorry, he hoped she did’t think him some kind of weirdo, though of course who wasn’t.

It was the of course, she thought, that had made her let down her guard. It had taken her most of her life to realize what he said so casually, that everyone was out of place at one time or another, not just her. He had met her at her door, when she entered, walking through her apartment to greet her. So much Bukowski, he had said, judging the pile of books on her table. And for some reason, she’d said, “I guess I like it rough.” Maybe he was just what she needed, she thought now as she drove toward the neon Citgo sign, someone with the power to surprise. He had called a week later—had he glimpsed her number taped to the phone for the cat sitter?—and asked her to come to Fenway, where he worked. Then he had whispered, as if no one should overhear, that he had something to show only her. She couldn’t remember the last time anyone had said only her.

So here she was. She parked at the first spot she found and walked toward the park. As she reached the gate, Henry popped out from somewhere within the green walls and took her arm. His hands were cold, and she found herself thinking, warm heart. He was wearing a maintenance uniform that reminded her of her father.

There was no one else inside. The team was out of town, she knew from talk at the clinic. “Come on,” he said. He could do anything to her here, she realized, and no one would know. Yet she followed him, even when he started running. They ran, gasping triumphantly, across the field toward the green monster, and she thought about how much her father would have liked this, how maybe if he had been taken by the arm and led across the field of his life, he would never have become so bitter. She thought how bitter she herself had become. And then they were slipping inside the wall, and she realized Henry had been holding her hand the entire time.

“Listen,” he said as he closed the door and threw them into darkness. There must have been a light somewhere, but he didn’t turn it on. Her heart rose to some challenge. She didn’t know what made her trust him, a man who would break into someone’s house. He had somehow broken into her, she would think later. “Do you hear that?” She felt his palm sweat—he was nervous. And this was where he came every day. Then she did hear something, a scratching deep inside the walls, like something was trapped in there. Followed by a long low moan, as if whatever it was was slowly giving up, recognizing that it would never get out.