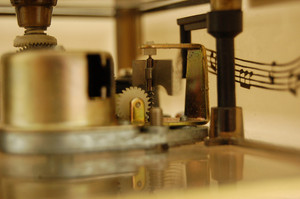 This week in the Guernica/PEN Flash series, we feature a piece by Orazio Labbate. Subscribe to the series and get new flash delivered to your inbox twice a month—no spam or news, just stories.

For a long time, Nathalie’s outline has remained calcified in the bed with her ghost. The weak sun illuminates its contours and every morning I leave the sheets loose so they won’t conceal the form. Meanwhile, the world outside is freezing and I am forced to gather blocks of travertine to plug up the windows; the intense cold has splintered the wooden shutters, the doors, the light poles, the fireflies. A few stars twinkle, the sky is darkening.

She had run away while I was sleeping, in the dark of night, in the woods, here in Minnesota. I remember leaping up as celestial flashes made me leave the house. I went running after her, barefoot, and caught a glimpse of her dressing gown flutter among the trunks as the trees remained silent. The ground was blanketed with snow and her footprints defiled it. I followed those footprints, my breath labored; particles of sleet had flown into my mouth. I couldn’t see her anymore, I’d lost her.

Could Nathalie have frozen to death? With your whitewashed blue eyes, come, kiss me in my sleep before going to the hereafter.

I had not encountered any humans for a year; my neighbors had starved to death. Day after day my food supplies were running out as well. I went down to the cellar to check how much I had left, and from one of the small windows I saw the snow change color, the leaves sift down like cinders. It was so cold that tears could not flow from my eyes. I walked across the room to where I kept the sack of rice and there next to it was Nathalie’s music box. I opened it. The dancer’s tiny body was rusty because of the time it had spent inside the black box. I touched the figurine, which no longer worked, and closed the box with both hands. A sharp pain shot through my stomach as a final echo of the internal mechanism came from inside the box. For the first time, I wanted to forget Nathalie.

So I opened the narrow window and hurled the music box out into the snow as hard as I could. It looked like a crow falling through the branches of an oak.

Why did you choose the woods, Nathalie? We made love under a maple tree, remember? That night in the woods you had to have whispered the words I love you to me.

On the floor was her blanket and I squeezed it with my right hand to calm myself. “May I die for what I’m about to do,” I told myself. Then I picked up the bag of rice and climbed back up from the cellar. I walked into the study. Hanging behind the desk was the frame that held the parchment of my Humanities degree, which, as its edges curled up, emitted an imperceptible sound.

I could see in my mind’s eye the day of my graduation. Nathalie was there to hold my hand during the ceremony that conferred the diplomas, and I didn’t care about the distinctions, the praise, any of the stuff that makes up a man’s life — all I cared about was her.

I opened the desk drawer, skimmed through the first page of one of my manuscripts whose prologue read: “I was a teenager when I first saw your blue eyes.” I wept over those words, fighting the cold that made my fingers tremble. I kept repeating to myself: Nathalie, what did I do to you? Was I perhaps wrong to love you at a time when the world was ending? We would not have lost each other. We would have recognized one another in the Afterlife where you would have picked me among a thousand other souls in the water, in a red terra incognita, in a coffin, clinging tightly, eyes wide open, because even there our love would have consumed the wood as the earth is now consuming my house. I went into the living room then, the manuscript in my hands, and decided to bury it in the garden where I had created a small cemetery of creatures that had belonged to Nathalie.

I had already buried the dog, Tom, some time ago. During the burial, bits of iron chipped off the shovel and the prostrate dog’s eyes remained open. Blue like Nathalie’s. For a moment I’d thought he was dreaming of an angel when he’d smiled at me before dying in his dog bed. But dogs don’t dream about angels because dogs don’t have faith. I covered him with dirt, my throat hurt, and I screamed a word as loud as I could while the rest of my exhausted body lay down beside the animal. “No one can bury us together, God is not a gravedigger,” I kept saying in those moments. I stood up and continued throwing dirt on top of earth dirt and the animal disappeared beneath the dead earth that hissed like a fire that has blown out.

When I got to the garden, however, I changed my mind about where to bury the manuscript and slipped on a woolen sweater as I headed out to the frozen pond where I used to swim with Nathalie. The pond, just a little over a mile from my house, had become a dry wash. In it there was no longer any water to drown myself among the reeds. All that could be seen in the dry bed was a darkness similar to nights when the trees await you patiently, unable to move.

From time to time as I walked I glanced at the manuscript pages that were the yellow of wheat. The dedication was the first name of our child. Far off, on the horizon, a bird lost its wings; watching it with watery eyes, for the first time I tried to imagine my future without Nathalie. I reached the pond and, with eyes closed, let the manuscript drop into the gully, not following it as it fell.

Now, on this night that seems like day, I lean on the kitchen table with clenched fists. From outside come beautiful, terrible sounds: tree trunks crashing down, birds dying, rumbling in the snow-covered valleys. Snow falls softly from the sky, along with a flock of ducks that hit the ground with a heavy thud, like a slab of meat on the slaughterhouse table. I roast them and admire the beauty of the gas that lights up the entire room. Then I go into my bedroom.

Sometimes I dream of you, Nathalie, with the baby’s skeleton reaching for your face, the child who died two days before you ran away. Who was the color of agate when you gave birth to him, suffocated with no explanation. Whom I took in my arms as the sun shining on your hair drew back against the window.

In the dream you say: “He’s not breathing, his coloring isn’t right, he won’t open his eyes. He’s dead!”

Then I embrace you gently, quietly, and carefully lay the body of the child in the empty cradle.

The baby now sleeps with the manuscript, under it, I think, in the depths of the frozen pond. And so he sleeps with his mother. I sacrificed him to the darkness of the wash while you, clinging to the same sweater that I’m now wearing, wept without a sound, your lips clamped. I remember clearly that overhead the rain was beginning to burn the plants and my face.

Now I hole up in this house, my heart unable to breathe because I live with the presence of Nathalie, the baby and Tom, the dog. The earth is about to become a brown star and every afternoon, from the valleys, I hear a woman weeping. I cover my face with my hands so I won’t hear her anymore and lower my eyes so as not to remember everything that happened. This bed is so empty. I don’t want to remember anymore, especially the dry wash. Yet I’m afraid just the same and I wonder: “Who knows when that woman will stop crying. Can her weeping perhaps be God’s secret?”

Orazio Labbate was born in Mazzarino, Sicily in 1985. His debut novel Lo Scuru was published in 2014. He collaborates with the cultural pages “Domenica24” of Il Sole 24 Ore and with the magazine Il Mucchio Selvaggio. His work has appeared in Nuovi Argomenti, Achab, and Nazione Indiana among others, and a collection of his short stories, tentatively titled Stelle ossee, is set for release in 2017 by LiberAria Editrice.

Anne Milano Appel is an award-winning translator whose work includes Paolo Giordano’s Like Family and The Human Body. Most recently, she was awarded the Italian Prose in Translation Award and the John Florio Prize for Italian Translation. Her forthcoming works include Syrian Dust by Francesca Borri (March 2016, Seven Stories Press) and My Italians by Roberto Saviano (May 2016, Penguin UK).