This Saturday, October 7, for the first time in years, everyone’s favorite literary bar crawl will return to Brooklyn. In the words of the Village Voice, if you’ve “ever snuck a flask into the library” or “would rather jam to Virginia Woolf than a woofer,” Lit Crawl is the night for you.

In the artsy heart of Brooklyn, this year’s Lit Crawl features a superb lineup of comics artists. From 6-7pm, cartoonists Julia Wertz, Gabrielle Bell, and Leslie Stein will appear in a conversation featuring humorous comic slideshows on living in New York City. After that, cartoonist Emily Flake will interview European cartoonists Zep, Patricia Lyfoung, Alexis Sentenac, and Karim Friha—all from the French Comics Kiss Better Festival—who will respond to questions in the form of live drawings that are “Worth a Thousand Words.”

In anticipation of these two back-to-back Lit Crawl events, curated by Illustrated PEN Guest Editor Meg Lemke, we’re featuring excerpts from two of the appearing cartoonists. First up is an excerpt from Julia Wertz‘s Tenements, Towers and Trash: An Unconventional Illustrated History of New York City, which Roz Chast calls “A must for anyone who loves and appreciates the city.” After that, read an excerpt from French cartoonist Zep‘s A Story of Men, the artist’s English-language debut, which Metronews describes as “a beautiful story of tragedy and friendship.”

We hope you enjoy these pieces and that you’ll join us this Saturday for a night of revelry that celebrates the literary community of New York City. 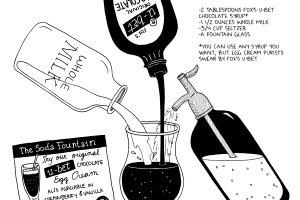 The exact history of the egg cream is of some debate, but the most popular claim is that it was created in the 1890s by Louis Auster… More 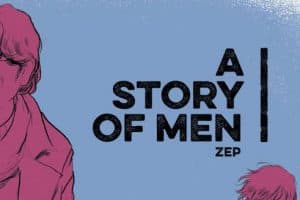 Welcome aboard flight BA 763 to London, Heathrow—would you please turn off all electronic devices, return your seats to the… More