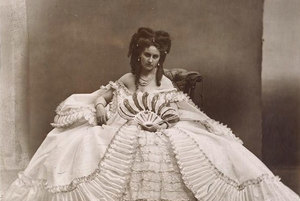 This week in the Guernica/PEN Flash series, we feature a piece by Alexander Chee. Subscribe to the series and get new flash delivered to your inbox twice a month—no spam or news, just stories.

In my role as Marguerite, I was much closer to the girl I’d been than in any role I’d played previously.

It was not angels who saved me then but the Cave of Queens and Courtesans.

Each night of Faust was a reminder.

If we kept the tapping soft, just soft enough, it was there, we could hear it, and they didn’t mind.

Often, there was still wailing.

There was nothing to do, no occupation to keep us busy other than keeping the mice, lice, and spiders at bay as best we could. The food was repulsive to consider and ended hunger bowl by disgusting bowl. And yet its arrival was still welcome; it relieved the tedium.

There was the spoon, the bowl, the terrible porridge or stew to scrape out.

Was it worse to starve or to eat it, always this was the question.

Was it worse to stay or to leave and return to the street?

Was it worse to stay or be bought? And leave to submit to the hands of the purchaser and his wants, the little favors and would-you-pleases and do-this-nows, which you were sure you could do forever instead of this, but your willingness would not matter: you would do it until the one who’d bought you was done with you, when you would return here, no matter your vows, to the bars and the bowl and the spoon, with the memory of who you’d been when you left, when you’d thought the bowl and spoon were never to be seen again. How foolish you were, how silly and small you were: you, you’d thought you were done.

But the bowl, the spoon, they knew they would see you again.

There’s a story told of my voice that says it was bought from a witch, the result of an occult surgery. I am said to treat it nightly with arcane oils and ointments, my real voice in a box on the witch’s mantel.

If you lift the lid, apparently, you can hear it saying everything I can’t say with this voice, the voice that sings. The witch’s bargain is that I cannot perform normal speech.

I never corrected this.

I like to imagine myself returning to the witch to bargain again. Pulling aside my scarf, a door there cut along my throat opening like a clock. I raise the box to my throat, and out comes something small and fierce. It hops in my hand like a little bird.

What would it say?

The real answer to where my voice came from is as ordinary as all of life. In Paris, in the winter, the chestnut trees in the Bois drop their nuts and the poorest gather them and roast them in fires on the street corners. The smell of them to me is the smell of the Paris winter coming. Wrapped in old newspapers, the corners folded back, the chestnuts steam in a neat pile, their split backs curling open.

I wanted to eat and so I learned to sing. I the same as the woman who on a winter afternoon roasts chestnuts from the Bois de Boulogne and sells them so she can buy her dinner. It took more than a witch to make a singer out of me. And if it was a gift from God that made me this way, it was the gift He gave us all, called hunger.

Alexander Chee is the author of the novels Edinburgh and The Queen of the Night, forthcoming from Houghton Mifflin Harcourt in February of 2016. He is a contributing editor at The New Republic and Lit Hub, and an editor at large at VQR. His essays and stories have appeared in The New York Times Book Review, Tin House, Slate, Guernica, NPR and Out, among others. He is winner of a 2003 Whiting Award, a 2004 NEA Fellowship in prose and a 2010 MCCA Fellowship, and residency fellowships from the MacDowell Colony, the VCCA, Civitella Ranieri, and Amtrak. He lives in New York City, where he curates the Dear Reader series at Ace Hotel New York.